Charles Kean never had the ability to enthrall an audience as an actor--like his father, Edmund Kean, certainly could. Still, he had a profound impact on the Victorian stage. Even if the younger Kean has unfairly eclipsed other great revivers of Shakespeare (like Samuel Phelps) Charles Kean has gone down in history as one of the greatest producers of "antiquarian" productions of Shakespeare, those using historically accurate sets and costumes. 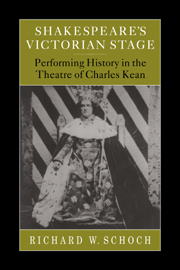 Richard W. Schoch's book Shakespeare's Victorian Stage analyses a number of Kean's productions, speculating on what they might tell us about the Victorians and how they viewed history. In his introduction, Schoch notes the nineteenth century's obsession with history, comparing Kean's project in the theater to similar attempts to understand history by Leopold von Ranke, Thomas Macaulay, and Karl Marx. Kean brought ancient Assyria to life in Sardanapalus by Lord Byron, examined Peru at the time of the conquest with Richard Brinsley Sheridan's Pizarro, and explored medieval France with Louis XI by Dion Boucicault. Schoch's focus, however, is on Kean's productions of Shakespeare's history plays.

The first chapter gives an overview of Kean's productions of the history plays, including his antiquarian production of King John. Kean was much indebted to the historicized King John of William Macready. However, Kean made the historical accuracy of the play the key marketing feature of his production. Advertising his 1846 production of the play in New York City, Kean boasted that "no labour or expense has been spared in endeavouring to attain the utmost fidelity of historic illustration."

In chapter two, Schoch delves into the significance of the public's desire to have historical accuracy. He argues that Kean saw himself and was seen as a historian as much as an actor, albeit a historian who embodied the past rather than merely writing about it. In 1857, Kean was even elected a Fellow of the Society of Antiquaries. This was the highest public honor a British actor had ever received, and it would remain so until Queen Victoria knighted Henry Irving in 1895. 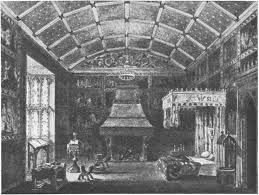 Schoch's third chapter views Kean's historical productions as emblematic of a crisis in Victorian culture. Looking specifically at Kean's production of Richard II, he sees a patriotic purpose in the revivals, as Britons tried to relate to a past from which industrialization and modernization had profoundly alienated them. He points out that the bedroom of John of Gaunt contained (according to a playbill) "paintings, selected from the very beautifully illuminated manuscripts in the British Museum, containing 120 miniature representations of scenes from the legendary lives of St. Edmond and St. Fremond." The actor playing Gaunt was thus literally surrounded by images of England's history when he intoned the patriotic lines:

This blessed plot, this earth, this realm, this England,
This nurse, this teeming womb of royal kings,
Fear'd by their breed and famous by their birth... 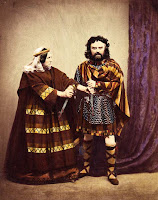 Chapter four takes a look at the role of medievalism in Victorian Britain. Schoch notes that Kean's 1853 production of Macbeth strove to recreate medieval Scotland by looking at the Nordic world. Kean hypothesized that the Scots (who left little evidence of their clothes and manners during this time) might have imitated the style of their enemies during the middle ages. Though this might seem odd to us, Schoch observes that other amateur scholars of the 1850s frequently looked to such places as Scandinavian poetry to recreate Britain's past. This placed Britain in stark contrast to the Latin heritage of Italy and France, thus promoting English nationalism.

The fifth and final chapter delves even deeper into the problems of history, noting that in Kean's production of Henry V in 1859, his wife Ellen played the Chorus in the guise of the Greek Muse of History, Clio. Critics objected to this move, claiming that it "somewhat jars at first with the Medieval character of the play." One critic went so far as to compare Ellen Kean with a "pantomimic fairy." The mixing of history and the supernatural apparently disturbed audiences in a history play in a way it did not bother them in a play like The Tempest.

Schoch closes his book with an envoi looking forward to the future of Shakespearian performance. Today, audiences not only don't need historical accuracy, they often want such antiquarianism done away with so they can concentrate on the characters as poetic fictions rather than real people. Schoch wonders if this might be in part because we have given up on establishing an objective version of history anyway.
Posted by James Armstrong, Playwright at 6:32 AM