In 1798, the playwright and actress Elizabeth Inchbald adapted August von Kotzebue's 1790 play Das Kind der Liebe as Lovers' Vows. Jane Austen apparently found the play charming enough to work it into her novel Mansfield Park. If you ever see or read the play, you will not wonder why. 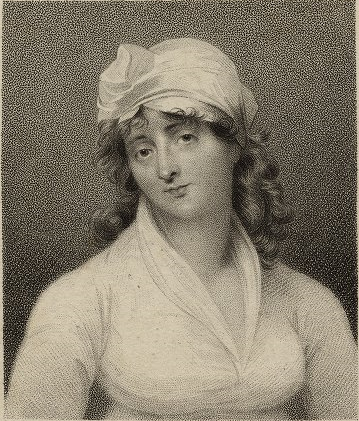 The title of Kotzebue's play translates as "The Child of Love" and refers to someone born out of wedlock. That is the situation of the young soldier Frederick. One might find it strange to have a play about a bastard be at the center of an Austen novel, and indeed, the heroine of Mansfield Park objects to the play, but not due to the character of Frederick. Rather, as Austen writes:

Agatha and Amelia appeared to her in their different ways so totally improper for home representation—the situation of one, and the language of the other, so unfit to be expressed by any woman of modesty, that she could hardly suppose her cousins could be aware of what they were engaging in; and longed to have them roused as soon as possible by the remonstrance which Edmund would certainly make.

Agatha Friburg is Frederick's mother, so her situation is understandably objectionable. However, Inchbald paints Agatha in the most sympathetic light possible. Her seducer talked to her of love and promised her marriage, and it is that promise that Inchbald places in the title of the play, rather than a reference to illegitimacy.

Amelia Wildenhaim is the character whose language is shocking. It so happens that she is the daughter of Agatha's former lover, Baron Wildenhaim. He abandoned Agatha to please his family with a marriage to another woman. By the time the play opens, that woman is dead, and as she and the Baron were so clearly incompatible, he has come to regret ever abandoning Agatha, whom he really did love.

Having learned that a love match is far superior to marrying for wealth or station, Amelia spurns the ridiculous Count Cassel and has her heart set on her tutor, Anhalt. She decides to teach her tutor a thing or two about love. When Anhalt protests that there are some things he had rather never know, Amelia responds saucily:

So you may remember I said when you began to teach me mathematics. I said I had rather not know it—But now I have learnt it gives me a great deal of pleasure—and perhaps, who can tell, but that I might teach something as pleasant to you, as resolving a problem is to me.

Only Inchbald could make mathematics sound quite so sexy!

Amelia pins her hopes on Anhalt, but when he is loath to propose to the daughter of his employer, she takes matters into her own hands. Amelia goes to her father to convince him she should marry whomever she wishes. Ultimately, the vows made between Amelia and Anhalt help convince the Baron that he must honor his own vow to Agatha, even though it was made so very long ago.

So even if you don't take it from me, take it from Jane Austen! Lovers' Vows is definitely a worthwhile play.
Posted by James Armstrong, Playwright at 8:57 PM