In Gothic fiction, the villain inevitably plays a prominent role in the story. Manfred in The Castle of Otranto, Montoni in The Mysteries of Udolpho, and Ambrosio in The Monk all capture the imaginations of the reader. Because Gothic villains are so much more fascinating than the heroes and lovers, it was only a matter of time before the villains themselves became the heroes. Rising above the sanctioned lover, the villain-figure became endorsed by later Gothic writers. This shift can be seen in the portrayal of Richard Wardour in Wilkie Collins's play The Frozen Deep.

Collins establishes Wardour as the Gothic villain in the first two acts of the play (a piece credited to him alone, though in many respects a collaboration with Charles Dickens). The character of Wardour stands in opposition to the lovers' happiness. He even appears to be a potential murderer. In the third act, however, the Gothic villain becomes a selfless martyr. Through his actions, he redeems another man's life, as well as his own soul.

The 1857 melodrama has many trappings of the Gothic. It takes place in the frozen wasteland that is the setting for Sir Arthur Conan Doyle's "The Captain of the 'Pole-Star'" and the frame story of Mary Shelley's Frankenstein. The self-professed Scottish seer Nurse Esther adds an element of the supernatural, with constant warnings of impending doom. Throughout the piece, Collins plays upon the audience's sense of fear. This reaches its climax in a highly Gothic situation: the hero alone with his murderous enemy while no one else is around.

In the first act, Richard Wardour is described repeatedly as the childhood "playmate" of the heroine, Clara. He is the son of a neighbor who is a good friend of her father. This gives a pseudo-incestuous quality to his love for Clara. Just as Wardour begins to step out of the bounds of being a brotherly playmate, Clara is faced with the death of her father. Like Emily in Udolpho, she must face the frightening world of adult sexuality alone.

Wardour steals a kiss from Clara, then heads out to sea. There he hopes to increase in wealth and rank enough to be worthy of her hand in marriage. During his absence, Clara falls in love with Frank Aldersley, and becomes engaged to him. When Wardour returns, he expects Clara to become his wife, and when he finds out that she is engaged, falls into fury and despair. He threatens Clara's fiancee, without learning his name, then departs to sea again on an arctic expedition. By chance, Aldersley is aboard the second ship on the expedition. It seems only a matter of time before Wardour discovers Aldersley's identity, and attempts to destroy him.

When the expedition results in a shipwreck, both men become leaders of the freezing, starving mariners. The second act takes place in a hut in the frozen deep where the surviving members of the crew are struggling to stay alive. Wardour appears as a vengeful fanatic. "There is a day of Reckoning appointed between us," he says of himself and his unknown rival. To Wardour, the rest of his life is meaningless, except for that day.

Wardour begins to suspect Aldersley when he notices carvings he has made in the crow's nest, now being chopped up for firewood. He does not act upon his suspicions, however, until they are confirmed. The men decide to send a party out to get help. Aldersley is chosen for the party, while Wardour is selected to stay and help tend to the wounded. When Wardour confirms Aldersley's identity as Clara's fiancee, he volunteers for a slot that opens in the exploring party. The second act closes with the two men going out into the wilderness together, with the implication that Wardour will murder his rival.


When the third act opens, the explorers have been rescued and taken to Newfoundland. The exploration party returned to the camp before the rescue, and only two brave sailors, Wardour and Aldersley, continued to search for help. These two are the only members of the crew still left missing. When Wardour returns, he appears to be mad, and is accused of murdering Frank Aldersley. Lieutenant Crayford thinks that he looks "conscience-stricken" and urges him to confess his crime. Instead, when he sees Clara, Wardour rushes off stage. Crayford thinks he is trying to escape, until Wardour rushes back on, carrying the limp but living body of Frank Aldersley.

Wardour explains that he saved his rival's life in spite of the temptation to slay or abandon him.  Wardour went so far as to save half of his food and drink for Aldersley, all done for the sake of Clara, the woman who spurned him.  "Saved, saved for you!" he cries when he brings Clara her fiancee. Having endured unspeakable hardships to preserve his rival for the woman he loves, Wardour collapses of exhaustion and dies. 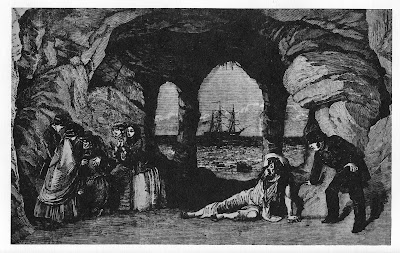 Aspects of Wardour can be seen to some extent in other works by Wilkie Collins. In The Woman in White, the hero Walter Heartright is rejected by his love, and like Wardour, then heads out for the sea. Franklin Blake in The Moonstone is a thief, but only because he is unknowingly acting under the influence of opium. These similarities seem mere technicalities. Both Heartright and Blake are free of the dark qualities of mind expressed by Wardour.

However, The Frozen Deep is in many ways as much a work of Charles Dickens as of Wilkie Collins. Dickens edited, produced, and starred in the premiere production of 1857. The role of Richard Wardour was "created" by Dickens in more than one sense of the word, as Dickens not only first played the part, he seems to have come up with the story of the play in the first place.

By 1856, Dickens had become increasingly frustrated with what he saw as the bounds of conventional morality in fiction. He felt that his own heroes were unnaturally good, and he wanted to portray a hero with serious inner conflicts. This new hero, however, would still remain faithful to his ideals. The Frozen Deep allowed him to portray this hero-villain both through acting and through his careful attention to Collins's script, which he edited heavily.

Dickens's production of the play was an overwhelming success. It proved that audiences would not just tolerate, but could be moved by a hero-villain like Wardour. It may have been this success that prompted Dickens to create one of his most beloved characters, Sydney Carton. In A Tale of Two Cities, Carton experiences inner conflict, but ultimately sacrifices his life to save the husband of the woman he loves. The parallels with Wardour are obvious.

While traces of the hero may be found in the villains of early Gothic novels, convention prevented authors from blurring the lines in the final analysis of the character. Ambrosio in The Monk is ultimately a doomed necromancer, and Doctor Frankenstein an equally doomed though repentant mad scientist. In the 19th century, however, it became possible for authors like Dickens to create a new hybrid of hero and villain.

Wardour becomes like a usurper who then hands over the castle to the heroine. His love for Clara transcends his jealousy. Though hardly Christ-like, Wardour gives up his own life for another in an act of redemption. This Christ-like act comes from a character traditionally associated with evil. In this way, Collins and Dickens subvert the paradigm of the Gothic, and suggest that there is salvation even for the villains.