Last night I had the good fortune to attend a screening of Ralph Fiennes' new film The Invisible Woman about the relationship between Charles Dickens and the young actress Ellen Ternan. Like Fiennes' last film as a director, Coriolanus, it was a wonderful concept and a perfect part for Fiennes. As with Coriolanus, the execution was not all I'd hoped for... but hello! Somebody made a movie about Nellie Ternan!

My favorite parts were when the film dealt with The Frozen Deep, a play credited to Wilkie Collins but virtually co-written by Dickens. The original production was done in Dickens's own home, with his daughters in starring roles. It was such a success that the amateur theatricals decided to stage it publicly for charity. Of course, Dickens wasn't about to have his daughters act upon a public stage. What to do? Hire professional actresses, of course!

It was during the production of The Frozen Deep that Dickens and Ternan first met, and thereon hangs a tale (and now a movie). That production, however, was legendary. The scenic effects were much commented upon at the time, and the film faithfully reproduces what the set looked like according to period illustrations. Hearing Felicity Jones deliver the play's epilogue as Ternan was a real treat.

And as if one Dickens play wasn't enough, the movie also showed a school production of No Thoroughfare. This was a remarkable melodrama credited to both Dickens and Collins, though Collins seems to have written the play by himself. However, it is based on a novella that the two great authors did write together. It was by far the most successful play billing Dickens as a playwright that he had during his lifetime.

Later this week, I'll have to write more about Dickens as dramatist. Meanwhile, feast your eyes on this delicious movie poster: 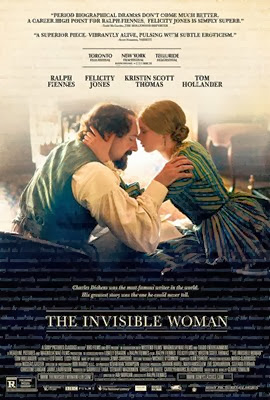