This afternoon, I had the pleasure of seeing Helen Sneed's wonderful play Fix Me, Jesus at the Abingdon Theatre Company. The play takes place in 1986 in a dressing room at the Neiman Marcus in Dallas, Texas. Annabell Armstrong, played with delightful neurosis by Polly Lee, tries to pick a dress for "the most important night" of her entire life. As she goes through racks and racks of dresses, she relives her life story, from a precocious pre-teen, to a political junky, to a rising star in the Democratic Party. Her insecurities threaten to overwhelm her, as she comes closer and closer to a nervous breakdown, but Sneed's light touch means we in the audience laugh sympathetically along with the character, following her on her journey of self-discovery.

Annabell's younger self is played by Kate Froemmling, a student at the Professional Performing Arts School making her professional debut. Though child performers can sometimes make me cringe, her acting felt completely natural in the intimate Dorothy Strelsin Theatre. Her scenes with her mother (played by Abingdon regular Lori Gardner) giving her diet pills along with life-long body-image issues, were just heart-breaking. Equally effective were the scenes with her grandmother (played by Broadway veteran Lisa McMillan) in which the young girl tries to sort through the racist, anti-semitic, and homophobic diatribes of the older woman and discover what it is about her that is still worth emulating.

The sole male member of the cast is Mitch Tebo, who plays Annabell's psychiatrist and happens to have some of the best lines in the play, all of which he delivers with panache. However, the emotional core of Annabell's world, and of the play, turns out to be the Neiman Marcus sales clerk, Mrs. Craig, played flawlessly by Lee Roy Rogers, who has been seen recently in such hits as Tribes and Orson's Shadow. Mrs. Craig first meets young Annabell on the day that Kennedy is assassinated (and when another event happens that becomes pivotal in the lives of both women). Over the years, she helps Annabell find dresses for all of the important occasions in her life, gradually forming a bond we don't see at first, but that develops into something surprisingly beautiful.

Much of the success of the piece comes from the superb direction by Sam Pinkleton. Best known for his choreography in such shows as Natasha, Pierre, and the Great Comet of 1812, Pinkleton maneuvers the cast around the stage of the Strelsin (notoriously about the size of a postage stamp) showing more than 20 years of Annabell's life. To his credit, it's almost always clear where and when the scenes are taking place. In this, he's aided by a set designed by Christopher Ford and Dakota Rose that is perfectly lit by Vadim Ledvin.

Unfortunately, Fix Me Jesus is only running until November 24, so hurry up and see it! 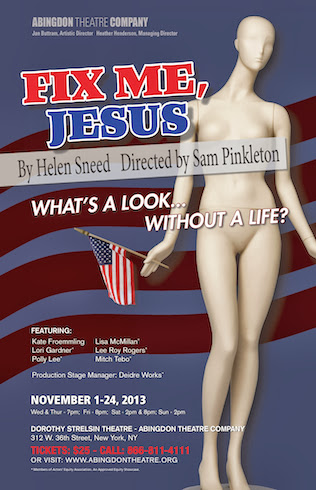