If you haven't seen Cara Maltz's new show My Mom Is a Sex Therapist, get down to The Duplex today by 3:30 for the last performance. The songs (mostly by Joshua H. Cohen, with a title song by Keith Varney) are quite lovely, and some of Maltz's stories are hysterical. 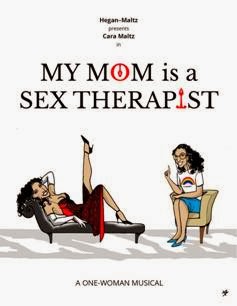 The opening number, "My Mommy is a Therapist," sets the tone for the piece perfectly, and Maltz does a wonderful job portraying a little kid as she explains to her classmates what her mom does for a living. Maltz also portrays the titular mother in the show, most memorably in the song "Love Yourself," naively explaining some of the facts of life to her daughter in a way no child wants to hear a parent speak--ever.

Though the play is billed as a one-woman musical, Maltz interacts quite a bit with her accompanist, Garrit Guadan. During my favorite song in the piece, "He Likes Me," Guadan interrupts several times, pointing out the warning signs as Maltz's character dates progressively worse and worse men.

Some of the show's success should also be attributed to director Stephan Varnier and to costume designer Nicholas Hartmann, who both give the audience a few surprises.

Posted by James Armstrong, Playwright at 10:00 AM