This morning I went the the Morgan Library to see their exhibit on Edgar Allan Poe. To my excitement, they had the manuscript of Poe's only play, a fragment of a verse tragedy called Politan. The label text had some snarky comment about how lucky we all are that Poe never attempted drama again, but here I must dissent. The fragment of Politan is actually quite good.

First published in 1835 in The Southern Literary Messenger, the play is set in Renaissance Italy but loosely inspired by the infamous murder of Solomon Sharp during Poe's own time. From the very first scene, Poe makes it clear that he is mixing genres, providing some magnificent comedy amidst a dark, gothic setting. The character of Castiglione muses:


Did I sigh?
I was not conscious of it. It is a fashion,
A silly -- a most silly fashion I have
When I am very happy. Did I sigh? (sighing.)

Castiglione is sighing for his rejected love, Lalage, though he is now engaged to be married to the Lady Alessandra. Meanwhile, Politan, the Earl of Leicester, is coming to town. Politan is a bit of a Faust figure, skilled in every branch of learning and dedicated to "Drinking the cup of pleasure to the dregs." Yet also like Faust, he is still melancholy.

In the second scene we meet Lalange, recounting the stories of tragic women to her maid Jacinta. Lalange has given all the jewels she received from Castiglione to the maid. Her only solace is a mirror that shows her how far she has fallen, as "It speaks of sunken eyes, and wasted cheeks." A monk tries to comfort her, but instead she takes a vow upon a dagger that she will be revenged.

The third scene introduces Politan, who recounts his sufferings to his friend Baldazzar:


Oh! I am sick, sick, sick, even unto death,
Of the hollow and high-sounding vanities
Of the populous Earth! Bear with me yet awhile!
We have been boys together -- schoolfellows --
And now are friends -- yet shall not be so long --
For in the eternal city thou shalt do me
A kind and gentle office, and a Power --
A Power august, benignant and supreme --
Shall then absolve thee of all further duties
Unto thy friend.

Politan hears Lalange singing and breaks an appointment with the Duke to follow her voice. In the following scene, Politan swears his love to Lalange. Seeing she is distraught over her abandonment by Castiglione, Politan promises the guilty man shall not live. After he exits, though, Lalange has second thoughts.

In the suburbs of the city, Baldazzar brings Politan news that Castiglione has declined a challenge, finding no quarrel with this stranger that could cause a duel. When Castiglione himself shows up, trying to smooth over the matter, Politan draws on him in the name of Lalange. Hearing the name of the woman he has wronged, Castiglione recoils.

This much is all that Poe had published in The Southern Literary Messenger. A longer fragment remained in manuscript form. Unlike the curators at the Morgan, I wish we had the full play.

In spite of the snarky comments about Politan, however, the exhibition is definitely worth seeing. You can find out more about it here: 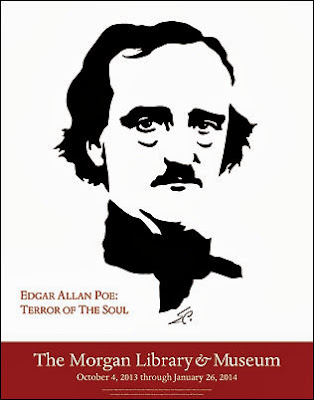