In medieval drama, Hellmouths frequently appeared on stage. A mouth opening up into Hell appears, for instance, in the illustration of a Passion Play performed at Valenciennes in northern France. Another Hellmouth appears on a diagram of a Passion Play put on in Lucerne, Switzerland.
The entrance to Hell also appears in various plays of the English Mystery Cycles. For instance, The Fall of Lucifer in the N-town Cycle ends with the lines:
Now to helle the way I take,
In endeles peyn ther to be pyht.
For fere of fyre a fart I crake;
In helle donjoone myn dene is dyth.
What did these Hellmouths look like? Well, both in the illustrations we have of medieval stages and general depictions of Hell in medieval art we see the mouth of Hell represented as a literal demonic mouth. Yesterday, I was as the Cloisters Museum and snapped this picture of a capital on a medieval pillar: 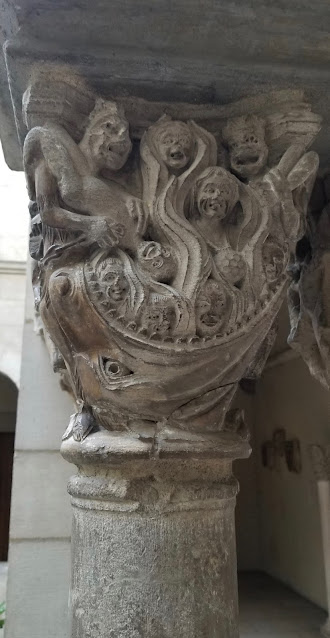 The souls are being dragged off to Hell by demons and are deposited in the gigantic teeth-filled maw. We see these demons in medieval plays as well. In the York Cycle's version of The Judgment Day, a demon says:
He schall do right to foo and frende,
For nowe schall all the soth be sought.
All weried wightis with vs schall wende;
To payne endles thei schall be brought.
In spite of the confidence of the demons, however, they are no match for Christ. In the play of The Harrowing of Hell, we see the gates of Hell opened up by the Messiah, who liberates the dead from Hell, going back all the way to Adam and Eve. In the Chester Cycle, Jesus says:
Open vp Hell gates, yet I say,
You princes of pine that be present,
And lett the Kinge of Bliss this way,
That he may fulfill his intent!
You can see an image of Jesus opening the Hellmouth and liberating the dead in this tapestry from the Metropolitan Museum of Art (at the Fifth Avenue location this time, not the Cloisters): 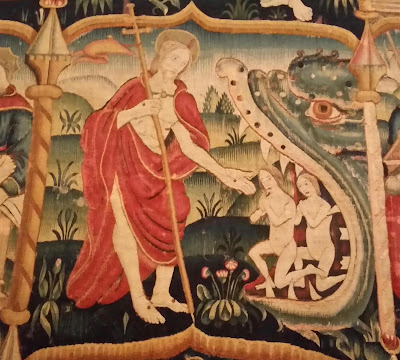 What was it like to see these Hellmouths on stage? I imagine it was pretty thrilling. Contemporary accounts recollect smoke, fire, and explosions coming out of some of the Hellmouths on stage. Quite a spooky effect!
Posted by James Armstrong, Playwright at 11:28 AM