If you haven't seen it yet, the Mint Theater Company is currently streaming Miles Malleson's play Conflict. For the rest of the month, you can watch the piece for free on their website.

Conflict involves an election, so it's rather timely, but the election it portrays is almost unimaginable today. I couldn't sympathize at all with the politics of Sir Major Ronald Clive (played brilliantly by Henry Clarke), who is the Conservative candidate for parliament. However, as a person, he is more than admirable, refusing to use dirt he has on the Labour candidate Tom Smith (played by the equally brilliant Jeremy Beck). His reason: The election should be about issues, not personalities!

Things get complicated when the love of Clive's life Dare (the excellent Jessie Shelton) starts to fall for Smith. This is the 1920s, so as a liberated woman Dare can choose whomever she wants as a lover. But... but... the Labour candidate! That's just too much for her family to take. I found myself particularly sympathetic towards Dare's father. Though the character's politics are frequently revolting, veteran actor Graeme Malcolm played him with such compassion that you couldn't help feeling sorry for the guy as his whole world comes crumbling down around him.

Malleson's writing is sharp, and the cast couldn't be better. I loved Beck in Bernard Shaw's Widowers' Houses back in 2016, and he brings a rather Shavian sensibility to the role of Smith. Jenn Thompson deftly directed the piece, and Martha Halley's costumes do a great job of evoking the period without feeling too alien to modern sensibilities.

So if you're tired of our country's own election and want to see how an electoral contest should actually be fought, check out the Mint's latest offering. If you can, you also might want to chip in a few bucks to help out the company, but whether you do or not, I'm sure they'd love to have you watch the show! 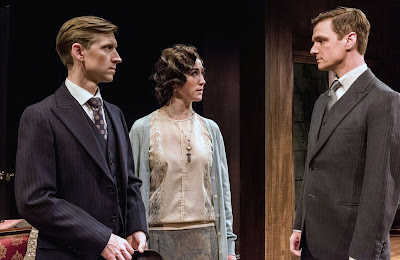