Written in 1573, Torquato Tasso's play Aminta is perhaps the quintessential pastoral drama of the Italian Renaissance.
The play begins with a prologue in which the God of Love, disguised as a shepherd, relates how his mother Venus wants him to dwell (according to Leigh Hunt's translation) "Among mere courts and coronets, and scepters." He, however, wishes "To lodge in the green woods" and shoot his arrows "In bosoms rude."
Love's point here is that romantic passion should not be just for the upper classes. He wants to dwell among the simple shepherds and bestow feeling upon the lowly as well as the exalted. There is one person in particular he'd like to target, too. She is Sylvia, "the cruelest nymph, / That ever followed on Diana's choir." The shepherd Aminta has been in love with Sylvia, but up until now, she has not returned his affections.
We meet Sylvia in Act I, where she tells her friend Daphne:
Let others follow the delights of love,
If love indeed has any. To my taste
This life is best. I have enough to care for
In my dear bow and arrows.
A follower of the virgin goddess Diana, Sylvia delights in "following the chase" as she hunts in the woods. She has no desire to enjoy the love of a man, though Daphne promises her that "Darkness, and one short night" has "the long luster of a thousand days."
Aminta has his own friend to confide in, named Thyrsis. Not only has Thyrsis been in love before, but he actually went mad with love, and went around writing poems on the barks of trees. (This detail, taken from Ariosto's poem Orlando Furioso, would later find its way into Shakespeare's As You Like It.) Sensing his own impending doom, Aminta asks Thyrsis to record his death "Upon a beech tree near where they will bury" him.
The second act opens with a satyr pledging to rape a nymph who rejected him. That nymph, we later find out, was none other than Sylvia. The satyr ends up tying her to a tree in order to have his way with her, but Aminta arrives just in time and chases him away with a lance. After Sylvia is cold to him following her rescue, Aminta goes off more depressed than ever. Thyrsis begins to fear his friend might even attempt suicide.
Aminta does seem to be on the point of killing himself when Daphne snatches away his lance. It's at this point that a nymph named Nerina runs on with even more bad news. After the whole satyr incident, Sylvia went out hunting with Nerina, and ran off in pursuit of a wolf. When Nerina caught up, all she found was a pack of wolves licking blood off of some bones, and Sylvia's hair net among them.
Fortunately, Sylvia isn't dead. She meets up with Daphne and tells her of her escape from the wolves, but Daphne relates how upon hearing that Sylvia was killed, Aminta ran off in desperation. At this point, Sylvia is overwhelmed with pity, crying:
Ah me! And thou not follow him! Let us go;
Oh, let us find him! If he would have died
To follow me, he must live now to save me.
The implication here is that Aminta's love has moved Sylvia. She now cannot imagine life without him, and if he has killed himself for her, she herself will no longer be able to live. Still, Sylvia claims that her tears for Aminta are not for love, but pity. A messenger arrives and announces that Aminta is dead, having leapt into a chasm in despair, leaving only a scarf behind. Picking up the scarf, Sylvia vows to use it to kill herself. First, though, she will go and bury the body of her beloved Aminta.
As the final act begins, the wise Elpino enters, calling Aminta fortunate. Everyone thinks this means Aminta is fortunate to be dead, and in death to have finally won his lover's affections. Elpino explains that in actuality some bushes broke Aminta's fall, and he was stunned, but alive. Seeing the limp body of Aminta, Sylvia embraced her lover, and revived him with kisses.
It's a beautiful story, and perhaps too naïve for our cynical era. On the other hand, perhaps it's just what we need as we wait for the election returns to slowly come in day by day. Aminta teaches that if we are patient, love will conquer hate, and though we might have to wait in fear and trembling, hope can lead at last to joy. 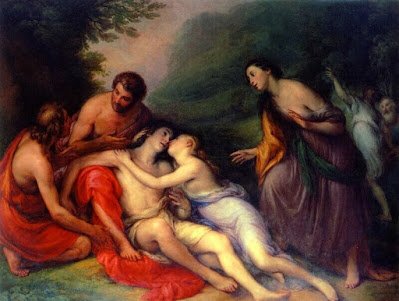