In the past, I've written about commedia erudita and commedia dell'arte, but not all drama during the Italian Renaissance fell neatly into these two categories.

Take, for instance, the actor and playwright Angelo Beolco, better known as Il Ruzzante. He wrote outrageous comedies related to commedia dell'arte, but like the commedia erudita plays, his were written down rather than improvised.

Ruzzante traveled around the area near Padua, and wrote in the dialect of that region. Around 1521, he published his first play, La Pastoral, a comedy about shepherds in love. Unlike Torquato Tasso's refined drama Aminta, Ruzzante's play was filled with coarse vulgarities. While Tasso's play ends harmoniously, La Pastoral resolves the plot by having the protagonist's father poisoned by an incompetent physician.

Ruzzante's plays typically feature a character named Ruzzante, whom he himself would play. One of his best known pieces is called The Parliament of Ruzzante, sometimes known as Ruzzante Returns from the Wars. In it, Ruzzante comes home from years of battle to rail against the evils of soldiers and warfare. The playwright himself seems to have been popular with the rural nobles who opposed the city of Venice in the Cambraic Wars in the early 16th century. Perhaps for this reason, his plays tended not to be staged in Venice later in his career, in spite of their dialect becoming closer to the one spoken in Venice.

Another playwright of the 16th century who is difficult to categorize is Leone Ebreo de' Sommi. A member of a prominent Jewish family in Mantua, de' Sommi wrote about 15 plays. Though most of them are in Italian, one, A Comedy of Betrothal, is the earliest surviving play of its kind in Hebrew. He is even better known, however, for writing a treatise on theatre production called Four Dialogues on Scenic Representation. Besides discussing acting practices, the work also delves into costumes, scenic design, and how to achieve lighting effects with specially colored glass. 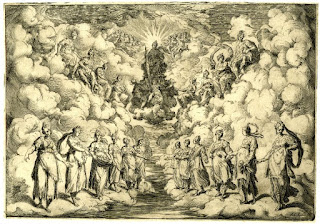 While staging serious commedia erudite plays, the Italian Renaissance delighted in producing elaborate spectacles in between the main play's five acts. Such a spectacle, which could become more popular than the play itself, was generally called an intermedio. A drawing by the artists Buontalenti and Andrea Boscoli shows a famous intermedio performed in 1589 at a play honoring a wedding involving the powerful de Medici family. The beautiful stage picture represents the harmony of the spheres, but also shows an allegorical figure of Necessity and the three Fates. Buontalenti, though from the artisan class and not a noble, was given a remarkable deal of control over organizing events for the wedding, and his designs were so praised they were recorded in engravings so they could be shared and remembered long after the event was over and the costumes and sets dispersed.

The intermedio of the 16th century influenced a new art form that told narratives but focused on music and spectacle. This new form, which came to be called opera, grew out of the Renaissance's desire to revive the musical nature of Greek drama. Jacopo Peri's 1597 composition Dafne is now lost, but descriptions of it lead most theatre historians to consider it the first opera. Some of Peri's later works, such as Euridice, do survive, but the first opera to make it into the standard repertoire is L'Orfeo by the composer Claudio Monteverdi. The poet Alessandro Striggio wrote the opera's text, known as the libretto, but opera came to regard composers as the real artists, and the libretto as secondary to the music. First performed in Mantua in 1607, L'Orfeo tells the story of the Greek poet and musician Orpheus who allegedly went down to the underworld to try to bring his deceased wife back into the world of the living. The story has proven to be remarkably enduring, recently being reborn in the Anais Mitchell musical Hadestown.

The architect Baldassare Peruzzi created a new standard of excellence in set design when he helped stage Cardinal Bibbiena's La Calandria for the pope. Peruzzi added a raked stage that slanted upward behind the main playing area. In addition to having a main backdrop, Peruzzi also added smaller backdrops on the sides known as wings. His predecessor Girolamo Genga had used one set of wings, but contemporaries were impressed by Peruzzi's use of multiple planes placed in front of the backdrop. These multiple levels of flat scenery added to the illusion of depth created by linear perspective. Peruzzi left many of his designs to his pupil, Sebastiano Serlio, who included many of his master's ideas in an influential work known as the Seven Books of Architecture. 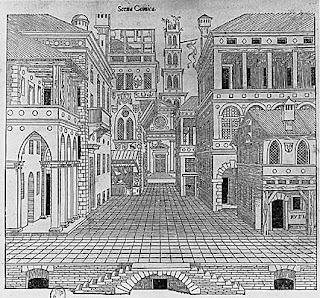 Written around 1545, Serlio's treatise became enormously influential in spreading Renaissance ideas of scenic design not just throughout Italy, but throughout all of Europe. The book describes how to set up a performance space and how to create illusionary scenic effects. Three of its most famous illustrations show hypothetical designs for tragedies, comedies, and pastorals. The tragedy design shows stately, ordered buildings, while the design for comedy shows a tavern, a building that might be a brothel, and structures beginning to decay. The design for a pastoral play shows trees and rustic cottages. Though Serlio's choice of three genres is influenced by the comedies, tragedies, and satyr plays of ancient Greece, his designs are pure Renaissance.

Later King Francis I of France invited Serlio to help build an elaborate chateau at Fountainebleau. It was in Fountainebleau that Serlio died, after helping to spread Renaissance aesthetics to France. His work in Italy, however, influenced another theorist of theatre design, Nicola Sabbatini. Sabbatini's Manual for Constructing Theatrical Scenes and Machines published in 1638 deals not just with the artistry of how to create beautiful designs, but also with the practical methods of achieving special effects on stage. In it, Sabbatini describes how to use iron or stone balls to imitate the sound of thunder and how to quickly change wings and backdrops. Some of Sabbatini's more fantastic effects included waves of water that appeared to move and dolphins that appeared to jump out of the water.

In addition to innovations in scenic design, architects made tremendous changes in theatre buildings during the Italian Renaissance. Many of the first theatres were built inside great houses and palaces. The powerful Medici family in Florence, for instance, built a theatre inside the Uffizi Palace of that city. An engraving by Jacques Callot portrays a production there in 1617. The engraving shows the audience arranged in a horseshoe fashion with dancers descending from an elaborately decorated stage. 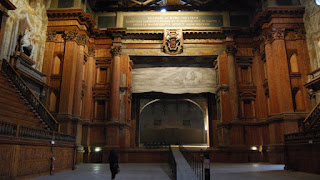 Other theatres, such as the Teatro Farnese in Parma, were created as freestanding structures. Built by the architect Giovanni Battista Aleotti in 1618, the Teatro Farnese is sometimes cited as the first purpose-built theatre with a permanent proscenium arch. Though it is built out of wood and plaster, the theatre was painted to look as if made of marble. It contains the same horseshoe layout for the audience, and was likely modeled after the Medici theatre.

The development of permanent proscenium arches was vital to the creation of Italian scenic design. Though the name "proscenium" derives from for the Latin term proscaenium, the proscenium is not the stage itself like in a Roman theatre, but rather the fixture around the stage, functioning like a window or picture frame containing the action. The proscenium arch places the scenery and performers on one side, and the audience on the other. The audience shares essentially the same view of the action. Because that is the case, elaborate stage machinery can be hidden behind the proscenium arch--either to the sides, above it, or below the stage--and painted scenery can easily be moved on and off the playing area. This set-up, which is essentially the same as most Broadway-style theatres today, later became the standard for most playhouses in Europe, and later, the world.

As the scenery in these new purpose-built theatres became more elaborate, the question arose of how to change the scene as the play moved from one locale to another. Sabbatini described how changeable wings could be constructed to allow stagehands to pull one set of wings to the side, revealing a second set of wings behind them. This required all of the wings to be two-dimensional and facing directly out to the audience. Another set designer, Joseph Furttenbach, who relocated to Italy from Germany, came up with a different solution. Inspired by the periaktoi described by Vitruvius, Furttenbach designed three-sided wings that could be rotated to have different sides facing the audience.

The backdrop was usually constructed of two panels known as shutters that met in the middle. By sliding the shutters apart or sliding together a new pair of shutters in front of them, technicians could change the backdrop as well as the wings. The only drawback of this method is it often left a visible crease in the center of the backdrop. Sometimes a three-dimensional set piece might be placed in front of the center of the stage to try to minimize the crease's visibility. Three-dimensional set pieces could not be changed as quickly as the shutters, however, which could be quickly pulled back with ropes.

A particularly effective method of changing two-dimensional scenery was the chariot-and-pole system. Drawings frequently attributed to the stage designer Giocomo Torelli illustrate how this method worked. A large winch beneath the stage moved poles attached to the scenery, shifting it either on or off the stage. Torelli improved this method by adding a system of counterweights that allowed a single person to move multiple wings and shutters simultaneously. Using Torelli's systems, technicians made fluid set changes that seemed almost magical.