One of the first playwrights in Italy to try to copy classical drama was Albertino Mussato, who wrote a Latin tragedy called Ecerinis around 1315. Though modeled after the plays of Seneca, Ecerinis was based on the life of a tyrannical Italian nobleman who had only been dead for about 50 years. Other authors, such as the fifteenth-century noblewoman Antonia Tanini Pulci, wrote religious plays in the vernacular Italian. Pulci's miracle plays recall the lives of saints in the medieval tradition, but unlike medieval dramatists, she had her plays published. By the beginning of the sixteenth century, people in Italy were seeing plays as literature, and not just as outlines for performance.

Because these plays were aimed primarily at scholars, they came to be known as commedia erudita, or learned comedy. (This term distinguished such plays from the improvised dramas of professional actors known as commedia dell'arte.) The churchman Bernardo Dovizi, known as the Cardinal Bibbiena for the town where he was born, wrote a play called La Calandra based on Plautus's Menaechmi. The play premiered in 1507 and was later performed before the Pope, in spite of (or perhaps because of) some rather scandalous scenes. More famous than Cardinal Bibbiena was Ludovico Ariosto, who wrote epic poetry as well as drama. Ariosto's most famous play, I suppositi (or Supposes), was later translated into English and influenced William Shakespeare.

Perhaps the greatest writer of commedia erudita was Niccolo Machiavelli. Though Machiavelli is best known today as the political theorist who wrote the cynical analysis of power The Prince, he was also instrumental in reviving Roman comedy. Around 1517, he translated Terence's The Girl from Andros into Italian, but Machiavelli was not content just translating the works of others. His play The Mandrake draws upon Roman drama, but takes place in the author's home city of Florence. Later in life, Machiavelli wrote another comedy, Clizia, inspired by Plautus's play Casina. In it, a father and son fight over the titular character, a beautiful woman who never actually appears on stage.

While Machiavelli excelled at comedy, Giovanni Battista Giraldi, known as Cinthio, wrote one of the great Italian tragedies of the sixteenth century. First performed in the city of Ferrara in 1541, Cinthio's play Orbecche sought to recreate the tragedy of Seneca, complete with violence and gore. The play's heroine, after being presented with the head of her husband and the bodies of her children, resolves to achieve revenge, which she accomplishes with great bloodshed. Other writers, such as the scandalous poet Pietro Aretino, attempted tragedy as well, but none as successfully as Cinthio. The dark mood of Orbecche was not popular, however, and Cinthio gave his later plays happy endings.

It seems that while audiences of commedia erudita did not need their plays to be all-out comedies, they also wanted to avoid the bloodshed of tragedy. The playwright Torquato Tasso achieved a perfect compromise by inventing a new genre: pastoral. Tasso's play Aminta, first performed at a garden party in 1573, embodies the aesthetic of this new form. The title character is a shepherd in love with a nymph named Silvia who at first does not return his affections. After much back and forth, and both characters falsely believing that the other had died, the two end up united in love. Imitations of Aminta include Giovanni Battista Guarini's The Faithful Shepherd, which also portrayed shepherds in love in an idyllic country setting.

Enthusiasts of these new, highly literate plays needed a place to stage them, as well as to put on the classical plays they were rediscovering. While plays could be performed in great halls of nobles or in the open air, many people wanted purpose-built theatres like the Romans had enjoyed. In 1580, the architect Andrea Palladio designed and began work on just such a building. Inspired by Roman theatres, Palladio's Teatro Olimpico in the town of Vicenza contains a scenae frons through which the audience can peak to see an elaborate stage set with linear perspective. The wood and plaster scenery designed by Palladio's successor Vincenzo Scamozzi, has been preserved up to this very day. 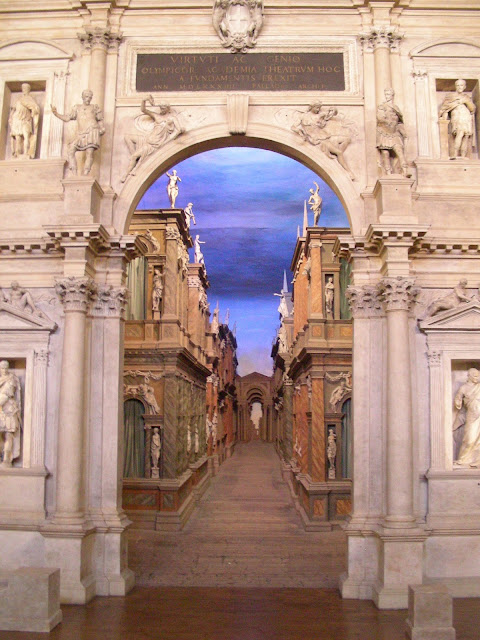