Today is the 150th anniversary of the death of Charles Dickens. I marked the day with the #Dickens150 conference... and a little time traveling.

Originally, I was going to be attending the wreath-laying ceremony at Westminster Abbey today, and a fellow time traveler even made herself a new dress for the occasion. Well, COVID-19 put an end to that plan, but I am grateful to Lydia Craig and Emily Bell for putting together a virtual conference to commemorate the event.

The trans-Atlantic conference began early in the morning, London time, and I was unable to get out of bed in time to catch the earliest presentations, but I did manage to see Pamela Gilbert, Sean Grass, Eric Lorentzen, Natalie McKnight, Lillian Nader, and and Pete Orford have a (virtual) roundtable discussion on Dickens and contagion.

Next was a second virtual roundtable on "Futures in Dickens Studies" with Malcolm Andrews, editor of The Dickensian, Dominic Rainsford, editor of Dickens Quarterly, and two of the co-editors of Dickens Studies Annual (McKnight again, and Edward Guiliano). Orford then returned for an interesting keynote on Dickens's last novel, The Mystery of Edwin Drood.

There was a choice of panels afterward, but I of course went to the one on "Theatrical Dickens" with papers on Dickens's own plays, the musical version of The Mystery of Edwin Drood, new adaptations of A Christmas Carol, and a burlesqued version of Our Mutual Friend called OMFG. I've written my own adaptation of A Christmas Carol, and have comedically abridged Dickens novels in Dickens Condensed, so I was eager to hear what the panelists had to say.

After a break, there were a number of lightning talks, including my own on melodrama and The Old Curiosity Shop. Unfortunately, I had a technical difficulty, and initially I was digitally locked out of the panel I was supposed to chair on Dickens, adaptation, and influence. Eventually, I got in, but someone else had to introduce Gina Dalfonzo, the founder of Dickensblog, who spoke on H.G. Parry's The Unlikely Escape of Uriah Heep. Mary Ann Tobin also gave a talk on Matthew Pearl's novel The Last Dickens, and Matthew Redmond spoke on Dickens in Little Women.

The virtual conference closed with Lucinda Hawksley interviewing director Armando Iannucci, whose new film The Personal History of David Copperfield still hasn't had its U.S. premiere, but will hopefully be available to us in the States this autumn. 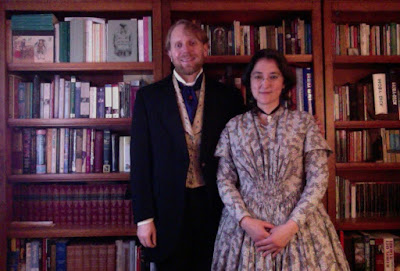