This past weekend, people all over the world celebrated the 208th birthday of Charles Dickens. Here in the city, the Friends of Dickens New York held its annual Birthday Luncheon, inviting two professional puppeteers to give a presentation on the history of Punch and Judy.

Each year, the Friends of Dickens chooses a different novel to study, and this year we are reading The Old Curiosity Shop. The book tells the story of Little Nell and her wanderings through the countryside with her grandfather. At one point, they come upon two showmen who display a Punch and Judy show. Though the novel makes numerous allusions to the story of Punch, it never comes out and tells what that story is, since its original audience was already familiar with it and didn't need to be told.

In the 21st century, however, such puppet shows are far less familiar, so we were happy to welcome Gretchen Van Lente and Brendan T. Schweda to tell us a bit more about the Punch tradition. Gretchen is the Artistic Director of the puppetry company Drama of Works and wrote and starred in The Sid & Nancy Punch & Judy Show, which combines the story of Punch and Judy with that of the tragic tale of punk rocker Sid Vicious and Nancy Spungen. I first met her, though, when she designed the puppets for an adaptation I wrote of A Christmas Carol. 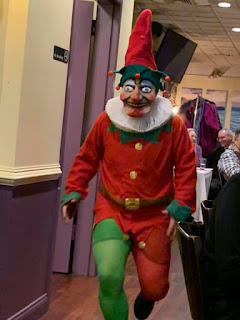 I had never met Brendan before, but he is a producer, performer, and author who started the Puppets Come Home! series to celebrate the history of puppetry in Coney Island and to welcome in the contemporary puppet community. In addition to being a Punch and Judy expert, he produces and hosts puppet shows with IBEX Puppetry and Coney Island USA. On Saturday, though, Brendan didn't just talk about puppetry, he briefly became a puppet, donning a giant Punch suit, complete with rubber mask!

The pair began by telling about the Punch character's origins in commedia dell'arte, the first recorded appearance of a Punch marionette in Covent Garden in the 17th century, and the famous engravings by George Cruikshank of hand puppets from a Punch and Judy show. Later, the puppet shows became beloved attractions at seaside resorts. Gretchen and Brendan showed slides of people watching these shows, including one slide of a Punch and Judy play at Coney Island at the beginning of the 20th century. We could almost smell the salt in the air!

Because Punch and Judy shows are a slapstick comedy (sometimes employing a literal slapstick wielded by Punch) they are easily adapted for a variety of purposes. Gretchen's The Sid & Nancy Punch & Judy Show is best seen live, but if you want to get a taste of it, there is video available. Instead of throwing the baby out the window, Punch/Sid throws the Sex Pistols out the window. Judy/Nancy beats him with a giant heroine needle, and he beats her back with his bass guitar. The aesthetic is pure punk rock.

A more traditional Punch and Judy show can be seen here. It still doesn't show us exactly what such a performance would have been like in Dickens's day, but it is a start. In any case, I was much obliged to Gretchen and Brendan for transporting us, at least for a little bit, back to an earlier era. 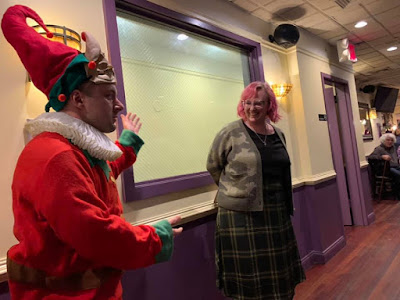