Last night, I saw Irish Repertory Theatre's production of Lady G: Plays and Whisperings of Lady Gregory. The piece explores the life and work of Augusta Gregory, one of the most important figures of the 20th-century theatre.

Lady Gregory is also the subject of an upcoming exhibit at the New York Public Library. Together with the poet William Butler Yeats and Sinn Fein activist Edward Martyn, she founded the Abbey Theatre in Dublin. Yeats also freely credited her with contributing to his play Cathleen Ni Houlihan. It was she, he said, who was responsible for getting the dialect of the local peasantry right.

Though she was born into the Protestant Ascendancy in Ireland and married into an aristocratic family, her sympathies were always with the common people, and she relished the Irish language, in spite of being forbidden from learning it as a child. After her husband Sir William Henry Gregory died in 1892, she threw herself into collecting folklore and trying to establish an Irish national theatre.

When the Abbey Theatre officially opened in 1904, it performed her short play Spreading the News along with Yeats' On Baile's Strand and Cathleen Ni Houlihan. Her biggest challenge as a producer came when the Abbey put on John Millington Synge's The Playboy of the Western World. The audience rioted, and when the company toured the United States, the play suffered the same fate in New York.

Irish Rep's piece goes over much of this history, with Una Clancy portraying Lady Gregory and a trio of other actors taking on a variety of roles. The production also fully stages two of Lady Gregory's one-act plays: Workhouse Ward and McDonough's Wife. These are rarely performed works, so get your tickets now! 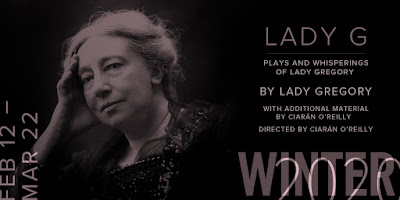 Posted by James Armstrong, Playwright at 9:05 AM