A Spirited Carol in Harlem

This weekend, I had a chance to see A Christmas Carol in Harlem, a delightful update of the classic Charles Dickens tale set in contemporary New York City.

A friend of mine from a local Dickens group went with me, and we were both impressed by the eerie quality of the ghosts. When Jacob Marley appears in the book, he passes right through a heavy door, and his body is transparent "so that Scrooge, observing him, and looking through his waistcoat, could see the two buttons on his coat behind."

How do you do that on stage? Well, during the 19th century they could use elaborate stage techniques like Pepper's Ghost, but that would never work in a space like Aaron Davis Hall, where The Classical Theatre of Harlem is staging the production in an intimate, three-quarter-round setting. Instead, projections designer Shawn Boyle has managed to create ghostly digital effects behind Steve Greenstein, who plays Marley, making an outline of the actor's face almost--but never quite--materialize on the backdrop. The effect is truly haunting.

My favorite spirit in the story is the Ghost of Christmas Past. The strange figure is "like a child: yet not so like a child as like an old man, viewed through some supernatural medium, which gave him the appearance of having receded from view, and being diminished to a child's proportions." In my own two-person adaption of the story performed in Saratoga Springs, we had a hand puppet perform the role, which worked quite well. Again, with the audience on three sides of the action, this would be unlikely to go over well in CTH's production.

The solution they came up with was perfect. Eryn Barnes, who plays the Ghost of Christmas Past, is an astonishing acrobat who moves in some of the most uncanny ways you're likely to see on stage. Walking on her forearms and performing amazing kicks and flips without breaking a sweat, she manages to also say her lines as if her acrobatic feats are as natural to her as taking a stroll down a country lane. Costume designers Lex Liang and Margaret Goldrainer dress Barnes in a sleek 1970s style that immediately calls to mind the youth of our contemporary Scrooge, played movingly by Charles Bernard Murray.

Generally, it is much easier to represent the Ghost of Christmas Present, who is described by Dickens as "a jolly Giant, glorious to see; who bore a glowing torch, in shape not unlike Plenty's horn." This is something we've all seen on stage countless times, but again, the CTH production comes up with an imaginative interpretation that is both faithful to Dickens's words and entirely original. Andrei Pierre plays the spirit with the help of a group of back-up dancers all dressed in the same shimmering color as his own clothes, making him appear as Dickens's jolly Giant, with the help of some splendid choreography by Tiffany Rea-Fisher.

The Ghost of Christmas Future is scary enough without needing to add much, so director Carl Cofield has opted to have him appear in the traditional black robe. The figure is still suitably mysterious, though, and the future sequence includes a number of tremendous performances, including that of Angela Polite (creator of the one-woman show MARY SPEAKS) as the spooky Clock Shop Lady.

Spirited music pervades the piece, directed by Kahlil X Daniel, who also looms over the stage as the Ghost of Christmas Future. Don't miss your chance to see the show before it vanishes on December 21st! 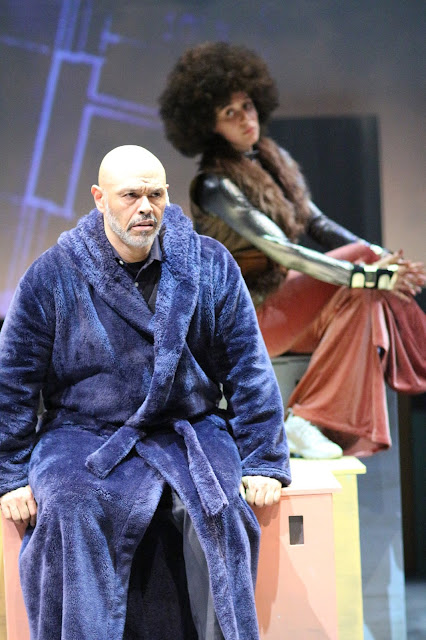 Charles Bernard Murray as Scrooge and Eryn Barnes as The Ghost of Christmas Past in Classical Theatre of Harlem's A Christmas Carol in Harlem -- photo by Jill Jones
Posted by James Armstrong, Playwright at 1:26 PM