Yesterday, I attended Astoria Performing Arts Center's production of Follies, a musical that takes place in a theatre about to be torn down.

The set design by Ann Beyersdorfer was perfect, and conveyed the dilapidated nature of the play's setting. The production was made all the more poignant, however, by the fact that this was the last day of the last production APAC would ever perform in that theatre.

APAC's theatre space, by the way, is a church gymnasium, which worked perfectly for their production of The 25th Annual Putnam County Spelling Bee, but has also been memorably transformed for Merrily We Roll Along and other shows. Both of those productions were directed by Dev Bondarin, who also helmed this wonderful Follies.

What was wonderful about it? Well, let's start with Stephen Sondheim's lyrics being perfectly articulated by a cast of veteran actors. Victoria Bundonis made sure you understood every last syllable of "I'm Still Here," and Greg Horton (who played Karl Lindner in last year's production of Raisin at APAC) gave one of the most insightful performances of "Buddy's Blues" I've ever heard (with help, of course, from younger performers Mandarin Wu and Kathleen LaMagna).

My favorite performance, though, came from Tina Stafford (who was a memorable Mrs. Corney in Shakespeare Theatre of New Jersey's Oliver Twist) as Sally Durant Plummer. Her rendition of "Losing My Mind" was heartbreaking. Her younger doppelganger, Andrea Dotto, was a magnificent Young Sally, and clearly has a bright future ahead for herself.

Where is APAC off to next? They haven't announced where they'll be performing next season, but keep your eye out for them. If Follies is any indication, we should be expecting great things from them in the future. 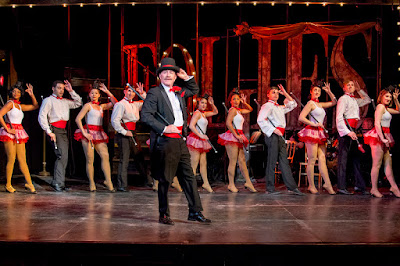