The Other Norwegian Playwright

It's a joke, right? How many Norwegian playwrights do you know? There's only one. Ibsen. That's it.

Except of course that it isn't. Even during Ibsen's lifetime, he wasn't the only Norwegian dramatist of note. He still had to compete with Bjørnstjerne Bjørnson. 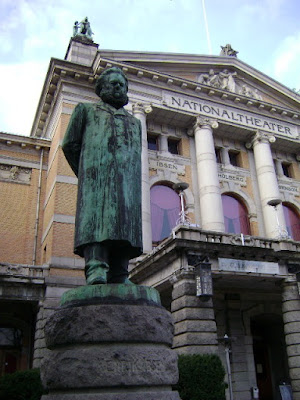 Norway's National Theater in Oslo has three names carved across its front facade: Ibsen, Holberg, and Bjørnson. Ibsen we all know. He was the great pioneer of Realism, author of such plays as A Doll House and The Lady From the Sea.

Ludvig Holberg came a bit earlier. He was one of the pioneering writers of the Age of Reason in the eighteenth century. Holberg, whose comedies include Jeppe of the Hill, The Lying-In-Room, and The Beautiful Bridegroom, was born in Bergen, which is now in Norway, but at the time was a part of a joint Dano-Norwegian kingdom. He spent much of his career in Copenhagen, though, and is claimed by both Norwegians and Danes as their own.

Though both Ibsen and Bjørnson wrote in a dialect of Dano-Norwegian that isn't really spoken anymore, they also both lived to see Norway become an independent country again in 1905, with its own king and parliament--and its own National Theater. The National Theater was actually founded in 1899, before Norway gained full independence. Its first director was Bjørnson's son, Bjørn Bjørnson, who gave the theater three opening nights, one for Holberg, one for Ibsen, and one for his father.

The first act of The Newly-Married Couple shows Axel, a young man recently married to Laura and now living with Laura's wealthy parents. When the two are invited to a ball being held in their honor, Laura declines to go, because her mother has a cough and she cannot fathom attending a ball without her dear mother. Axel is amazed that his young wife is more attached to her parents than she is to him. He progressively tries to assert himself, suggesting he and Laura move out on their own so he can get a job with his uncle's law firm and make a name for himself. All this is foolishness to Laura and her parents, but eventually her father relents, sadly admitting that it is only natural for a daughter to forsake her parents and cling to her husband.

As the second act opens, the audience sees Axel and Laura's sitting room, which is arranged almost identically to the sitting room of her parents in the first act. Axel has had to arrange everything exactly as it was before just to keep Laura mollified, and has even hung two large portraits of her parents in the room. In spite of her husband's efforts, Laura is still homesick, and when her friend Mathilde introduces her to a sentimental novel with a plot suspiciously like her own situation, she becomes even more miserable. A surprise visit by Laura's parents looks like it can only lead to disaster, but the parents mistakenly observe how the couple have made each other profoundly happy. The two young people have their eyes opened to how much the other has sacrificed for love, and all ends happily.

When the play opened in 1865, Ibsen and Bjørnson respected each other as comrades both fighting to elevate the literature of their native language. True, Bjørnson was enjoying considerably more success, but Ibsen does not seem to have held that against him. Two years later, Ibsen's play Brand was being performed in Stockholm, and he was publishing his masterpiece, Peer Gynt. Bjørnson loved Peer Gynt, giving the poetic drama high praise, but in 1869 Ibsen published his satyrical play The League of Youth, and Bjørnson believed that he himself was being made fun of in character of the protagonist, Stensgaard. Ibsen denied this, and even wrote a letter to Bjørnson to patch up their friendship, but the damage was done.

The two became reconciled years later due to another play, Ibsen's Ghosts. Critics mercilessly attacked the play, but Bjørnson saw its merits and vigorously came to Ibsen's defense. A couple years after the publication of Ghosts, Bjørnson wrote his controversial play A Gauntlet. By that point, Bjørnson had drawn the ire of so many people in Scandinavia that he had difficulty getting the play produced. It was first performed in Hamburg, Germany, in an altered version Bjørnson hated. Both playwrights were now having to deal with a hostile public.