The 25th Annual Putnam County Spelling Bee is one of those delightful shows that you just can't see too many times, which is why when I found out that the Astoria Performing Arts Center would be doing the show in Queens, directed by the incomparable Dev Bondarin, I knew I wanted to go.

What I wasn't prepared for, though, was that the play would be even more affecting than it was on Broadway. It isn't that the multiple-Tony-Award-winning production wasn't brilliantly directed by James Lapine when it played at Circle in the Square. It was. Somehow, however, what APAC has managed to do with the piece in a small venue in Queens is truly magical.

Part of the magic is the space. The play takes place in a gymnasium, and APAC's theater really is in a converted gymnasium, which had to be marginally less converted for this production. That didn't mean the company skimped on the set, though, as Tim McMath's set design definitely works some theatrical magic in the second act. Still, the small, intimate setting does a lot to bring home the message of the play.

As do the performers! While all of them are professionals (and most of them Equity members), none of the actors have struck gold on Broadway (yet). Lindsie VanWinkle, who memorably played Eliza Poe in Nevermore Off-Broadway, gives a stand-out performance as spelling bee host Rona Lisa Peretti. She is accompanied by Matt Welsh (seen last year in APAC's Merrily We Roll Along) as Vice Principal Douglas Panch, an assistant administrator in need of anger-management training. Billy Lowrimore also has some hysterical moments at Mitch Mahoney, the "Comfort Counselor" doing community service.

It is the spellers, though, that really break your heart. There's Chip (Stephen Mark), who painfully learns how unfair life can be, the home-schooled Leaf (Lee Slobotkin), who is thrilled just to participate, the overachiever Marcy (Emily Borromeo), who discovers the joy of not living up to expectations, the precocious Logainne (Heslens Estevez), who is president of the LGBT-Straight Alliance at her elementary school, the shy Olive (Becca Andrews), who waits patiently for her absent father to finally arrive, and the magic-footed William (Patrick Halley), who gradually learns to care for a world that never cared much for him.

All of the actors are people to watch in the future. But why wait until then? Head out to see them now in an intimate space in Astoria. APAC's production is running until May 28th. For more information, go to: 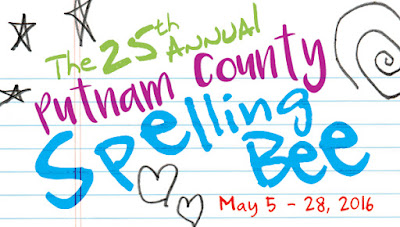 Posted by James Armstrong, Playwright at 8:11 AM