Today is the 219th birthday of Mary Anning, the fossil hunter and paleontologist who revolutionized the scientific world at the beginning of the 19th century. 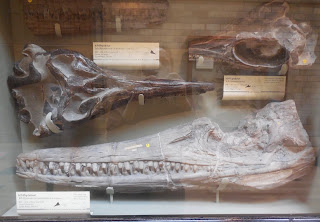 My play about Anning, Bones of the Sea, had a reading earlier this year by Elephant Room Productions. You can hear a selection from the play (and an interview with me) on the company's podcast The Trumpet.

Anning was a working-class woman and a religious dissenter. She had three strikes against her: wrong class, wrong sex, wrong religion. Yet she managed to make remarkable contributions to the scientific world. Now more than ever, I think we need stories like hers.

The fossils Anning uncovered (including the first discovered remains of an ichthyosaur, which she and her brother found while they were still children) provided the core of the fossil collection at the British Museum in the 19th century. Most of those fossils have since been moved to the Natural History Museum in London.

When I was in London a couple years ago, I took pictures of some of the fossils Anning had collected. Unfortunately, she had to fight to get some of her finds recognized. After she uncovered a plesiosaur, some skeptics claimed she must have faked the fossil, arguing no sea creature could possibly have had a neck that long. After colleagues of hers uncovered another plesiosaur fossil elsewhere, more people started to believe her. 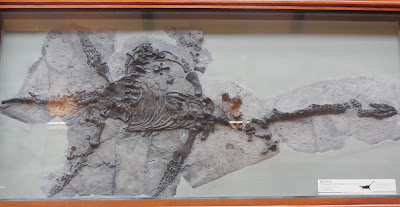 I'm hoping the play will have another reading in the coming year. Stay tuned!
Posted by James Armstrong, Playwright at 7:27 AM