Yesterday, I began attending my first conference of the Modern Language Association, which is meeting in New York City this year.

I'll actually be presenting two papers. On Saturday morning (at 8:30 am) I'll be a part of the "Dickens and Resistance" session arranged by the Dickens Society. Diana Archibald put together the session, which also includes talks by Sophie Christman-Lavin, Jolene Zigarovich, and Jonathan Farina.

My paper is called "A Blot in the Theater: Dickens, Macready, and the Quest to 'Revive the Drama'." It deals with how Charles Dickens championed Robert Browning's play A Blot in the 'Scutcheon even as his friend, William Charles Macready was ensuring the play's demise. 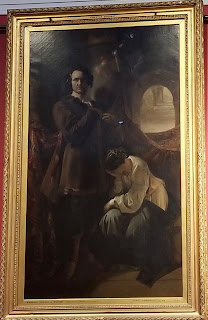 Macready got along much better with playwrights if they were dead. He famously revived William Shakespeare's King John with lush period costumes and scenery painted by William Telbin (who based his work on existing medieval buildings). Macready also turned Lord Byron's play Werner into a star vehicle for himself. You can see here a painting of Macready as Werner. (It currently hangs in the Victoria and Albert Museum.)

Yesterday, I had the pleasure of attending another Dickens panel called "Ephemeral Dickens" that was put together by Susan Zieger. Elizabeth Frengel and Janice Carlisle gave a talk called "Disposable Dickens" on researching Dickens ephemera in the archive. One interesting item they brought up was a call slip from the British Library on which a young Dickens had requested the book Greenwich Hospital. That book is a collection of short comic sketches illustrated by George Cruikshank, who went on to illustrate a book of short sketches by Dickens, Sketches by Boz.

Lillian Nayder, who I had heard speak before at a meeting of The Friends of Dickens New York, gave a talk called "Dickensian Jottings" about how Dickens's celebrity has frequently moved his marginal notes to center stage, and allowed his postscripts to replace scripts. I was particularly intrigued by the last talk of the session, in which Rebecca Mitchell spoke on the famous "Dolly Varden" dress inspired by the character in Barnaby Rudge. The style was based on the polonaise dresses popular in the 18th century, but it received a revival in the nineteenth century after it was worn by the actress Augusta Thomson as Dolly Varden in an 1866 stage adaptation of Barnaby Rudge. 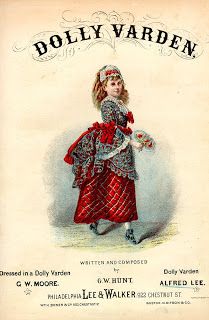 The Dolly Varden dress caused quite a craze in the 1870s. Many songs were composed about it, and you can see the cover of some sheet music for one at left. The Franco-Prussian War might have had some affect on the craze, since the latest fashions from Paris where temporarily unavailable. When Dickens died in 1870, though, one of the items in his estate was a painting of Dolly Varden William Powell Frith had done in the 1840s. After that sale, the style became all the rage.

If you're still around on Sunday at noon, one of the last sessions of the MLA conference will be "Revolutionary States: George Bernard Shaw, 1918." Jennifer Buckley is presiding, and I'll be giving a second paper called "Staging Immortality in 1918: Bernard Shaw and Luigi Antonelli." The paper takes a comparative approach to dramatic responses to the end of World War I and the emergence of state communism, examining Shaw's Back to Methuselah and the Italian playwright Luigi Antonelli's A Man Confronts Himself.