CAPITAL Is Open, and Reviews Are In!

This weekend, I flew out to Michigan to watch the opening performances of my play Capital at Detroit Repertory Theatre. 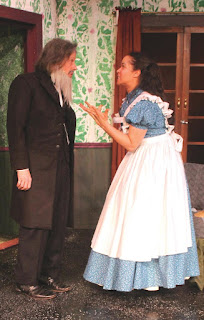 The opening went well, and now the reviews are starting to come in! Martin F. Kohn wrote an excellent piece for Encore Michigan you can read here. A word of warning, though: it does include a few spoilers.

As Kohn points out, Capital is set in London in 1858, the city of both Karl Marx and Charles Dickens. The play mixes political philosophy with knockabout farce, as Marx's daughter Jenny tries to get a new silk bonnet by any means necessary.

Leah Smith ably directed the piece, which features an excellent cast, including Harry Wetzel as Karl Marx and Lulu Dahl as his daughter Jenny. Kohn called Jenny "a combination of teenage petulance and intellectual acuity." Sounds about right to me!

Ben Will has perhaps the most difficult part, playing a variety of roles, including a traveling salesman, the promoter of a reading tour, a police constable, a landlord, and a great author. Sara Catheryn Wolf plays the actress Nelly Ternan, and is particularly funny when Nelly shows off her melodramatic acting.

Mary Copenhagen did a great job with the costumes, and I was particularly impressed by the versatile set designed by Karl Marx himself... Harry Wetzel! Thomas Schrader designed the lighting and Burr Huntington did the sound design, both of which suited the play perfectly.

If you're in the Detroit area, make sure you see it! The production is excellent and will be showing until May 14th. 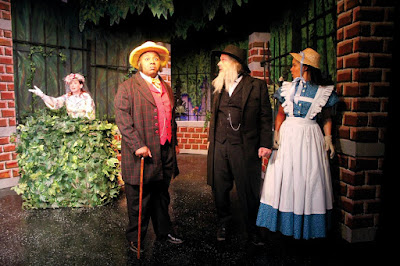