I've loved the music to Ludwig van Beethoven's Fidelio for a long time, which is why I was particularly excited to see it last night at the Metropolitan Opera.

What really struck me about this production was how funny it was! That should come as a surprise, since the plot is deadly serious. Leonore, suspecting her husband is being secretly held in a prison, disguises herself as a young man named Fidelio in order to investigate.

In order to get close to a mysterious prisoner chained up in the dungeon of the prison, Leonore ingratiates herself to the kindly jailer Rocco. When Rocco's daughter Marzelline becomes enamored of "Fidelio" Leonore plays along. Anything to get closer to her husband!

This is where the humor comes into play. In the Met's production, not only do Marzelline and "Fidelio" become engaged, but Rocco even crowns his daughter with a bridal wreath and performs a hand-fastening ceremony as part of the betrothal. Hanna-Elizabeth Muller was so excited as Marzelline she became a joy to watch on stage.

The subplot came back at the end, though, as Marzelline appeared at the joyous finale when Leonore is reunited with her husband. The opera does indeed call for Marzelline to be on stage and to respond to the shock of learning her betrothed is a woman, but I wasn't prepared for the high comedy of her appearing decked in flowers only to be driven to distraction by the revelation that Fidelio is actually Leonore.

Fidelio still has a few more performances at the Met between now and April 8th, so catch it if you can! 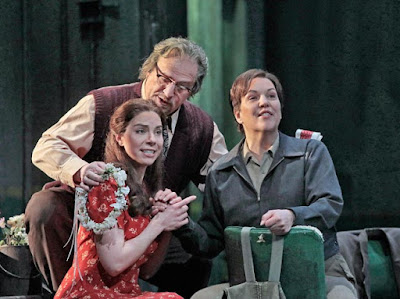