"In this last tempest"

This afternoon, I saw Phyllida Lloyd's production of The Tempest at St. Ann's Warehouse, and I was pleasantly surprised.

Harriet Walter plays Prospero, but unlike other women I've seen play the duke, she doesn't de-masculinize him. This production, set in a women's prison, doesn't change pronouns or amend the character's name to "Prospera" as I've seen done in the past. While Lloyd re-imagines the play, she allows Prospero to be Prospero, even though he is now being played by a woman.

The one thing that seemed odd to me was that like in the Public Theater's version with Sam Waterston, this production chose to pronounce Prospero's dukedom "mi-LAN" like the actual city in Italy. This throws off the meter, though. Following iambic pentameter, the name of Prospero's dukedom should be pronounced "MI-lan" instead. Is the geographically correct but poetically inferior pronunciation gaining ground? I hope not.

This is a minor issue, though. Overall, the acting was superb. Leah Harvey was particularly good as Miranda, bringing a youthful girlishness to the part, and I frequently forgot that Sheila Atim was a woman while I was watching her play Ferdinand. In fact, when she appeared wearing a skirt in one scene, my first reaction was that she was wearing drag, so thoroughly had she embodied the male character she was playing.

The Tempest is only playing one more week (until February 19th), so if you want tickets, get them fast! You can find out more information at: 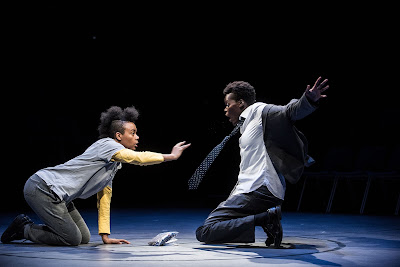