The Cherry Orchard on Broadway

This afternoon, I saw the Roundabout Theatre Company's production of The Cherry Orchard. An all-star cast (headed by Diane Lane) does a competent job with Chekhov's last and greatest play, and made me nostalgic for my college days, when I played Yepikhodov in a student production at Drew University.

Lane plays Madame Ranevskaya, a once wealthy landowner returning from Paris just in time to see her estate put up for auction. Her brother Gaev (played wonderfully by John Glover) has a million ideas and no idea for how to save the family home. Her daughter Anya (played by Tavi Gevinson, who did a great job earlier this year in The Crucible) realizes everything is going wrong, yet that doesn't stop her from falling in love with a penniless student.

But enough about them! How was the real star of the show, Yepikhodov? Quinn Mattfeld plays the comical bookkeeper, and I enjoyed his performance from the moment he came in with his squeaky boots. Now, I'm not saying he was as good as I was in the role, but I did feel for him when he was scorned by his love Dunyasha (a delightfully awkward Susannah Flood). The party in the third act was transformed into a masked ball, and Yepikhodov's costume was particularly outrageous. (You'll have to see the play for yourself to find out how he was dressed!)

Other fine performances are given by Chuck Cooper (whom I last saw in Amazing Grace) as Simeonov-Pischik, Joel Grey as Firs, Celia Keenan-Bolger as Varya, and Harold Perrineau as Lopakhin. The adaptation was penned by Stephen Karam, best known for writing The Humans. If you're interested in seeing the show, check out Roundabout's website here: 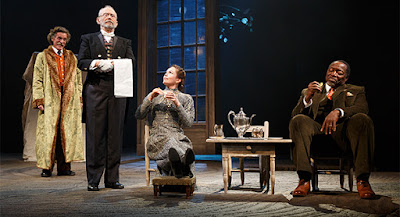