I just saw Ivo van Hove's Broadway production of The Crucible. Though the modern dress and some directorial weirdness might grab headlines, what really makes this version so remarkable is the honest, straight-forward acting that illuminates how wonderful Arthur Miller's play really is. 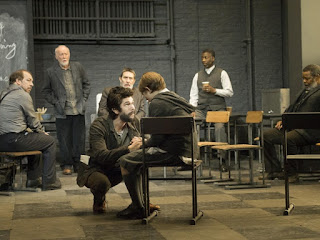 While I did not see van Hove's critically acclaimed rendition of Miller's A View From the Bridge, I did see his staging of Susan Sontag's Alice in Bed at New York Theatre Workshop way back in 2000. Like that production, The Crucible features some questionable choices. (A line about nakedness leads to a literal stripping on stage, and one emotional moment is accompanied by hurricane-strength winds.) Still, there is an intensity to the acting that makes familiar material seem fresh.

The set for The Crucible, designed by Jan Versweyveld, is a modern-day classroom, and when the curtain first rises, we see a group of schoolgirls at their desks. The curtain lowers again, and when the play proper begins, one of the girls lies motionless, with her father distraught. Rather than focusing on the girls, though, van Hove chooses not to perform the optional scene Miller cut from the original production, in which Abigail faces John Proctor in the forest. The decision helps to make this production decidedly John Proctor's play, in spite of star performer Saoirse Ronan playing Abigail.

Ben Whishaw, who memorably portrayed John Keats in the film Bright Star, plays Proctor. He manages to be upright, even as he confesses to adultery and wavers on whether or not to sign a false confession. His denunciation of Abigail is particularly powerful, and he mostly has good chemistry with Sophie Okonedo, who plays his wife, Elizabeth Proctor. In the final scene, where Elizabeth often shines, Okonedo's acting is subdued, placing even more emphasis on Proctor.

During a few moments, van Hove stages the supernatural, even though the play is clear that magic spells and flying witches don't really exist. This introduces an ambiguity Miller never intended, but it also makes the audience take the possibility of witchcraft more seriously, perhaps making the actions of extremists in the play more understandable.

This limited engagement is only playing through mid-July, so if you're interested in seeing it, check out the show's website:

The Crucible on Broadway
Posted by James Armstrong, Playwright at 5:49 PM