I recently finished reading Joseph Roach's book It, which traces stardom from Restoration England to the celebrities of the present day.

Roach's introduction sets up his project by first identifying the intangible quality we mean when we say a certain person has "it." He quotes Elinor Glyn, who wrote in the forward to her novel called It:

To have "It," the fortunate possessor must have that strange magnetism which attracts both sexes. He or she must be entirely unselfconscious and full of self-confidence, indifferent to the effect he or she is producing, and uninfluenced by others.

In Glyn's novel, the charismatic protagonist with "it" is a man, but when it came time to make a movie of the work, Paramount wanted to turn the piece into a vehicle for their newest discovery, Clara Bow. Anyone who has seen the film knows that Bow definitely had It. There were plenty of other stars in Hollywood who were more beautiful of better actors, but it doesn't matter. When she's on screen, you can't take your eyes off of her. It's that elusive quality of attraction that Roach wants to chronicle throughout the Anglophone world.

Though the book does follow a loose chronology, it jumps around more often than not. Rather than organizing the chapters by time period, Roach groups his examples by metonymy, naming his chapters accessories, clothes, hair, skin, flesh, and finally bone.

The accessories chapter touches on a number of topics, including the Restoration's original It girl, Nell Gwyn. An accessory, Roach notes, is something supplementary that serves to identify the wearer, but is not itself necessary. So it was with the famed actress who became an accessory to King Charles II, a beautiful but ornamental mistress who served a political purpose in the king's retinue of women by serving no political purpose at all. Gwyn remained popular because belonging to no one she belonged to everyone. Roach cites Aphra Behn's dedication of her play The Feigned Courtesans to Gwyn, in which the playwright gushed:

...you never appear but you glad the hearts of all that have the happy fortune to see you, as if you were made on purpose to put the whole world into good Humour; whenever you look abroad, and when you speak, men crowd to listen to you with that awful reverence as to Holy Oracles or Divine Prophecies, and bear away the precious words to tell at home to all the attentive family the Graceful thing you uttered.

In his chapter on clothes, Roach backtracks a few years from Behn's play to focus more on George Etherege's 1676 comedy The Man of Mode. The play provides two archetypal characters, the seductive rake Dorimant and the outrageous fop Sir Fopling Flutter. The play underscores the importance of clothes to both these types by having the entire first scene take place in Dorimant's dressing room while the protagonist puts on clothes--in Roach's words--"as a well-attended knight dons armor to do battle."

The chapter on hair delves more thoroughly into the eighteenth century, quoting not just Alexander Pope's The Rape of the Lock, but also Oliver Goldsmith's She Stoops to Conquer. This was an age of wigs, and Roach gets much out of Old Hardcastle's reminiscence of how Tony Lumpkin "fastened my wig to the back of my chair, and when I went to make a bow, I popped my bald head in Mrs. Frizzle's face." 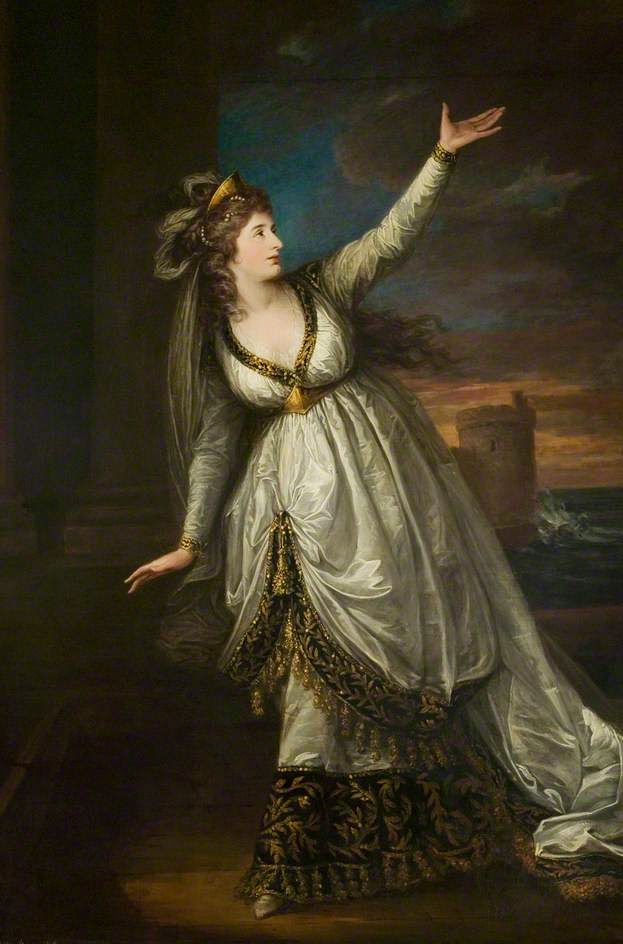 A chapter on skin cannot help but bring up the deathly pallor of Sarah Siddons, especially as depicted in her portrait by Sir Joshua Reynolds as The Tragic Muse. Siddons, Roach notes, also played Euphrasia in Arthur Murphy's 1772 tragedy The Grecian Daughter. This role became the subject of another portrait of Siddons by William Hamilton.

The chapter on flesh jumps ahead to the twentieth century and George Bernard Shaw's play Pygmalion. (Incidentally, this year marks the centennial of the play's premiere.) The famous opening scene of that play takes place in Covent Garden, a site already haunted by a great deal of theatrical history. Roach notes how the fascination Henry Higgins develops for Eliza Doolittle is mirrored in Shaw's own fascination with Mrs. Patrick Campbell, the actress who first played the role.

Roach's final chapter on bone deals with the dark side of It, the attraction of the highwayman and the pirate. John Gay's The Beggar's Opera becomes a key text here, along with Bertolt Brecht and Kurt Weill's re-imagining of the play as The Threepenny Opera.  Roach makes an interesting case for using the original Marc Blitzstein adaptation that opened off-Broadway in 1954 rather than the more faithful translation by Ralph Mannheim and John Willett. Though Blitzstein had Jenny Diver sing the song "Pirate Jenny" rather than Polly, he did so with good reason. Lotte Lenya was playing Jenny in that production, and her interpretation of the song has deservedly been ingrained into our consciousnesses.

It is a delightful book, and I whole-heartedly recommend it to anyone interested in celebrity in the theatre.
Posted by James Armstrong, Playwright at 8:10 PM