Today, I delivered my paper "Edmund Kean and Byron's Self-Fashioning in Manfred" at the International Conference on Romanticism in Manchester.

I was speaking on a panel sponsored by the Byron Society. First up on the panel was Fuson Wang from the University of California, Riverside, who spoke on Byron and disability. Fuson touched on Manfred but naturally spent more time on Byron's incomplete play The Deformed Transformed.

Stephanie Hicks of the University of Edinburgh gave her talk on liberty and autonomy in Manfred. She spoke about Byron's involvement in Whig politics, relating Manfred's defiance of both human and supernatural characters in the play to the Whig tradition of standing up to the power of the crown. Interestingly enough, though, she said Byron did not approve of radical reformers like Henry Hunt.

My own paper was well received, and I even got an interesting question from the audience about the legend that Kean had been made a chief among the Huron Indians. My memory of the incident was a little hazy, so I'll have to look it up when I get back home. Three ladies form the Irish Byron Society came out for the conference, and I ended up chatting with them quite a bit after a reception this evening, which was a lot of fun.

I also received a lovely e-mail from Christine Kenyon Jones, who I met at my last conference in Nottingham. As I mentioned before, she had come across an illustration George Cruikshank did of Manfred. Well, she was kind enough to e-mail a copy of the illustration to me, so I am including it below for my loyal readers. (Both of you!) 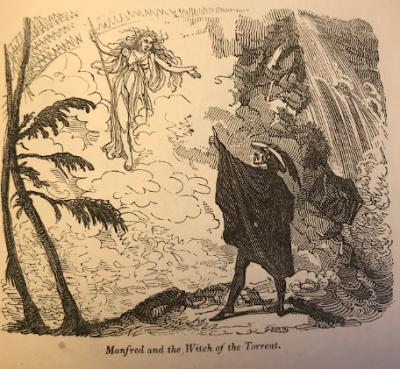