Lord Byron published his drama Manfred in 1817. Now, 200 years later, a number of people are taking advantage of the piece's bicentennial to take a closer look at the work. 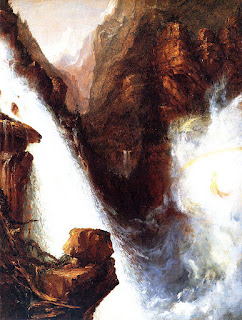 Thursday night, Red Bull Theater performed a staged reading of the play with Jason Butler Harner in the title role. And yesterday, New York University held a symposium organized by Omar Miranda to take a more academic look at Manfred.

After I saw the reading, I spoke with Miranda, and he invited me to the symposium. I have to teach on Fridays, so I missed much of it, but I managed to make it over in time to hear Emily Bernhard Jackson from the University of Exeter talk about Manfred, Byron, and incest.

Jackson noted that the character of Manfred expresses guilt, and that incest was a central concern both for Manfred and for his creator, Lord Byron. (Byron likely had a sexual relationship with his half sister, and Manfred loved a woman named Astarte, who also seems to have been related to him.) However, she observed that Manfred's guilt does not necessarily come from incest.

Even if Manfred did commit incest, did that cause his guilt? No, Jackson argued. The source of his guilt was Astarte's death. Manfred does not regret that he loved Astarte. Rather, his real regret lies in her response to that love. Jackson pointed out that Byron's poem Don Juan jokes about sibling incest, and his play Cain portrays incest as natural. Manfred's guilt doesn't come from the incest, she argued, but from the result of that incest, Astarte's mysterious death.

Jackson was followed by Richard Lansdown talking about Manfred and suicide, and Alice Levine comparing the play to the Don Juan legend. Lansdown mentioned that the arrival of modernity can be judged by when the suicide rate surpasses the homicide rate. That occurred around 1680 in London, but only recently in a part of Italy where organized crime has dominated for years. Levine's talk was equally interesting, as she observed that Mozart's Don Giovanni has more in common with Manfred than it does with Byron's Don Juan. 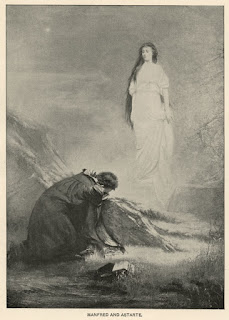 After a break, Jeffrey Cox and Michael Gamer kicked off a new panel on Manfred, performance, and theater. They compared Manfred with melodrama, a genre which Cox called a machine built for speed, and that speedily consumes everything in its way. He noted that in the wake of the French Revolution, there were 30,000 performances of the melodramas by Rene-Charles Guilbert de Pixerecourt. In Germany, the melodramas of August von Kotzebue received more performances than all of the plays by Friedrich Schiller and Johann Wolfgang von Goethe combined!

Gamer filled in some more information on melodrama. Thomas Holcroft, who adapted Pixerecourt to the English staged, was praised by his contemporaries for his ability to capture real life. What made melodrama a genre, however, was not its style but its form, in that it utilized music. Popular melodramas of the early nineteenth century borrowed music from ballet and pantomime to create mood. Similarly, he said, Byron used singing in Manfred, working in music as he tried to revive tragedy.

Jonathan Gross then spoke about the Freemason imagery in Manfred, and Miranda compared Manfred  to Percy Shelley's Prometheus Unbound. The keynote address, however, was given by Jerome McGann. He noted the similarity between Astarte's name and the name of Byron's half sister, Augusta. For all the parallels to Byron's life, through, Manfred remains deeply obscure, deeply ambiguous, and deeply suggestive, he said.

Most exciting for me, however, was at the reception afterward getting to meet Frederick Burwick. I've very much enjoyed reading some of Burwick's books, but I did not know how many Romantic-era plays he had directed! He and Paul Douglass have also made a great number of the songs used in Romantic plays available online.

Do yourself a favor and check out their site, Romantic-Era Songs. It's wonderful!
Posted by James Armstrong, Playwright at 9:12 PM