Last Sunday, 192 people came out to see the matinee of my play Capital at Detroit Repertory Theatre.

Tomorrow, however, the cast will be taking a break for Easter. Performances will resume on Thursday, April 20th.

Earlier this week, Capital got a great review in the Detroit Free Press. It's also been favorably received by Encore Michigan and the blog It's All Theatre. You can also read about the play in the Detroit Metro Times.

The show has a great cast including Harry Wetzel as Karl Marx, Lulu Dahl as his teenage daughter Jenny, Sara Catheryn Wolf as the actress Nelly Ternan, and Ben Will as "That Guy"--a stranger who morphs into a variety of different characters throughout the play.

Leah Smith has done a wonderful job directing the show. It's only playing until May 14, so get your tickets now! 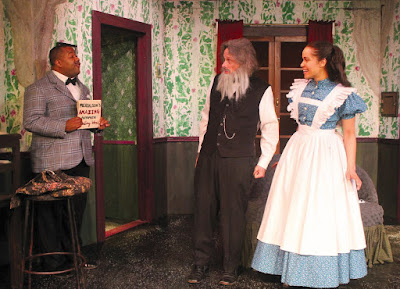 Posted by James Armstrong, Playwright at 8:09 AM