I'm sad that I missed yesterday's performance of Burns Night at the Secret Theatre, but I had a good excuse. I've been attending the conference of the British Association for Romantic Studies in Nottingham.

This year's conference theme was "Romantic Facts and Fantasies" and I was invited to present a paper on the French premiere of Percy Shelley's The Cenci, which sought to combat many of the myths about the play, though the production ended up perpetuating other fantasies. 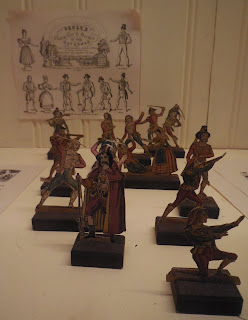 I arrived in the United Kingdom on Tuesday and visited the Museum of London Docklands. Though I wasn't sure how much I would enjoy it, they had on display some toy theatre prints and figures, which of course won me over right away. The following day, I visited the Keats House in Hampstead Heath, and then my sister and I saw Jack Thorne's new play The End of History at the Royal Court.

Thursday, I took the train to Nottingham, but trains throughout England were having difficulties. The official story was that due to high temperatures they had to limit train speeds, which meant that... they had to cancel half the trains. I waited in two wrong lines before I finally got the information I needed. Eventually, I got into Nottingham and was able to take a tram out to the university where the conference was being held. The walk to the conference center, though, was long... and quite hot.

There were some good presentations on Thursday, and I was excited to hear Sonia Hofkosh speak about Lord Byron's screen, which incorporates images of famous actors. I was looking forward to visiting the screen in person on this trip, but I learned that the curators had turned it so that none of the portraits of actors are visible! I spent some furious time e-mailing folks at Newstead Abbey, which has the screen. The end result was... less than satisfying, which means I guess I'm going to have to arrange another trip to Newstead Abbey someday in the future.

On Friday, there were some other good papers, including one by Nora Crook about Mary Shelley's mythological dramas Proserpine and Midas (which also included some lyrics by her husband Percy). There was also a whole panel on Romantic drama. Michael Gamer spoke on a cartoon that the British Library has named "The Monster Melodrama" though it actually contains more noticeable references to pantomime. Sara Medina Calzada talked about a dramatic sketch discussing the Spanish Revolution of 1820. Michael Simpson spoke on Lord Byron and the address he wrote for the grand re-opening of the Theatre Royal at Drury Lane. All three of the talks were informative. 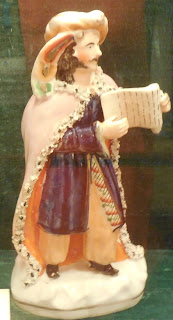 Speaking of Byron, on Saturday I did make it out to his old home, Newstead Abbey. Alas, I couldn't see the side of his decorated screen that I wanted to examine, but they had other interesting objects on display, and I still enjoyed the visit. One thing I wasn't expecting to see was a Staffordshire figure of the actor Mr. Barton in the role of Giaffer in an adaptation of Byron's poem The Bride of Abydos. The figurine might be associated with an 1847 production at Astley's Theatre. Right now, I'm not sure which Mr. Barton this is, but I'm going to try to find out!

Today, I gave my own paper in the morning, and I also attended a splendid talk by Christine Kenyon Jones on illustrations of Byron. She showed an engraving I was not familiar with that George Cruikshank did of the Witch of the Alps from Manfred. Though the engraving was done before the play had been staged, it seemed to be influenced by period staging techniques, so it anticipated a production of a play that had as yet not been performed.

I am staying one more night in Nottingham, and tomorrow I head to Manchester for the International Conference on Romanticism. Wish me luck!
Posted by James Armstrong, Playwright at 4:03 PM