My short play Burns Night opens this Friday, July 12th, as part of the Long Island City One-Act Festival at the Secret Theatre.

The first show is at 7:30 pm. We're second on a bill of shorts that includes plays by Seth Freeman, Jeremy Kehoe, Brianna Singer, and others. Tickets are $18 in advance and $20 at the door.

Burns Night is a comedy that tells the story of two friends hiding out in a kitchen while a celebration of Robert Burns and all things Scottish starts to go overboard. Ilanna Saltzman is directing the play, following her directing a reading of the piece at Urban Stages.

Maria de Vries is reprising her role of Keira from the reading. Her other New York theatre credits include the Abingdon Theatre Company, Red Monkey, ATA, and Oxford Shakespeare. Most recently she appeared in Squirrel Screams and Other Dating Sounds by Lindsay Timmington. Her MFA is from UNC-Greensboro.

The role of Steph is being played by Alice Hale, who I originally met through Urban Stages as well. Alice's New York theatre credits include Golden Vanilla at New York Summerfest and A Hand Across the Bridge at the Planet Connections Theatre Festivity. She's appeared on television in ID's Hometown Homicide and in the Web series Northbound, The Uncanny Upshurs, and Public History. Her BFA is from NYU Tisch, and she has studied at Stella Adler Studio of Acting and Stonestreet Screen Acting Conservatory.

It's my first time working with Alice, and only my second time working with Maria and Ilanna, But they're all great. Rounding out the cast as Steph's boyfriend Malcom is Zach McCoy, with whom I've worked on multiple occasions. He appeared in my short play The State of Colorado v. Tennessee Williams, as well as readings of The Love Songs of Brooklynites. (Keep a look out for an announcement about that play soon.) 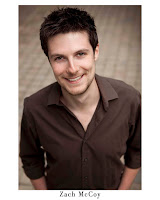 Zach's favorite stage credits include David in Love and Human Remains (Peter Jay Sharp Theatre at Playwrights Horizons - NYC), Bernard in Boeing, Boeing (Millbrook Playhouse - Pennsylvania), and Colin in The Birthday Boys (co-producer; Access Theatre - NYC). He is hysterical in Burns Night, so you don't want to miss him!

The Secret Theatre is located at 44-02 23rd Street in Long Island City in Queens. It is set back a bit from the street, so don't miss it when you walk by... and make it live up to its name! This is going to be a good show, so I hope to see you there.