Yesterday, my short play Burns Night opened at the Long Island City One-Act Festival at the Secret Theatre in Queens.

Maria de Vries did an excellent job reprising her role as Keira, which she originated in a staged reading at Urban Stages. Alice Hale is delightful as Keira's friend Steph, and Zach McCoy is hilarious as Steph's kilt-clad Scottish boyfriend Malcolm.

Unfortunately, our fearless director Ilanna Saltzman couldn't join us for opening night, but she'll be there next week for a 5:00 performance on Saturday, July 20th. I hope you'll join us!

Below is a picture of me and the cast. Hope you can make it! 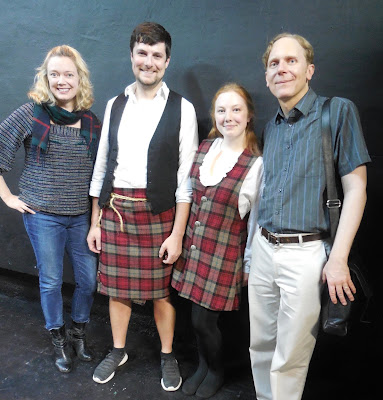 Posted by James Armstrong, Playwright at 9:36 AM