Last night I saw New York Classical Theatre perform Cymbeline in Central Park. Last summer, the company performed Nahum Tate's adaptation of King Lear, but now they are back to sticking (more or less) to Shakespeare's original text.
The plot of Cymbeline is intentionally complicated, blending together legendary history with one of the folk tales that appears in The Decameron. This production has the potential to add to the confusion by having a small cast double in multiple roles.
Fortunately, the doubling adds to the production rather than taking away from it. In some productions, the actor who plays Posthumous doubles as the villain Cloten. That was how the Public Theater did it in 2015 when Hamish Linklater played both roles. In this case, however, Brandon Burk plays both Posthumous, Imogine's husband, and Guiderius, her long-lost brother. The delightfully comic Evan Moore-Coll instead plays Cloten, as well as assorted other roles. 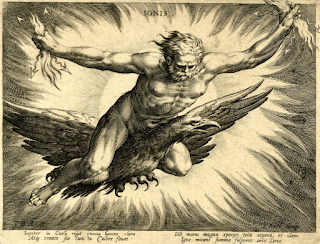 One of the highlights of the show is when Aziza Gharib, who plays Imogine, appears in Posthumous's dream as (according to the stage directions) "Jupiter descends in thunder and lightning, sitting upon an eagle." Unlike the Jacobean stage, Central Park is not equipped with machinery to lower giant eagles from the Heavens. Instead, Gharib appears with huge wind-swept pieces of fabric, while two other cast members hold them out and provide other-worldly sound effects.
The supporting cast is in fact quite good. Jenny Strassburg plays the evil queen, a delicious role, though the character disappears toward the end of the play. Perhaps to compensate for that, she also plays Belarius, who fosters the king's lost sons. (The second son is played by Christian Ryan, who doubles as the deceitful Iachimo.) Terrell Wheeler (who also appeared in The Assembly's wonderful production of That Poor Dream) plays the important supporting roles of Pisanio and Caius, while the king himself is played by Nick Salamone.
If you want to see the production, it will be in Central Park until June 26th, after which it will move to Carl Schurz Park, and then Brooklyn Commons Park at MetroTech.
Posted by James Armstrong, Playwright at 9:46 AM