Tonight, everyone should be heading out to the Treehouse Theater to see my short play THE STATE OF COLORADO v. TENNESSEE WILLIAMS as part of the Bad Theater Fest. However, tomorrow, if you haven't seen it yet, you need to check out The Assembly's production of That Poor Dream, a brilliant new modern adaptation of Great Expectations. 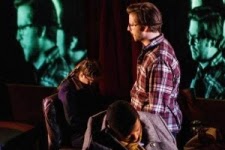 I saw That Poor Dream last night, and I must say, it's one of the best pieces of theater I've seen all year, and it's also one of the most memorable adaptations of a Dickens novel you'll find. It uses much of the original dialogue from Great Expectations, but also tweaks certain details to update the story for the 21st century. Magwitch's sheep herding becomes metaphorical rather than literal, for instance, and the forge becomes Joe Gargery's "Tech Forge" computer shop.

The play takes place on a train on its way from Grand Central to Connecticut. Pip, on a cell phone, explains that his name is Pirrip. "P-I-R-R-, oh, just call me Pip!" The playful opening quickly turns darker, as he is confronted by a stranger, soon revealed to be Magwitch. The rest of the play occurs largely in flashback as Pip explains his tale to this mysterious figure from his past.

Nick Benacerraf designed the magnificent set, which consists of a realistic-looking train car with three windows. Those windows become the home of some spectacular video projections designed by Ray Sun. At times, we see the passing scenery outside the car, at others, close-ups of the actors, at others, background scenery for the flashback scenes. At key moments, the walls of the train car melt away, and we see images of club dancers, wedding guests, or sometimes homeless beggars.

That Poor Dream was developed in part at the New Ohio Theatre's 2013 Ice Factory festival, and it has returned to the New Ohio for this brief run. You can find out more about the production here:

I regret that I didn't get to see this earlier in the run so I could tell everyone to go and see it. But I'm telling you now: GO! Unlike Pip, you won't regret it.

Posted by James Armstrong, Playwright at 8:56 AM