Today is the 209th birthday of Charles Dickens. Though the plays Dickens wrote were never as popular as his novels, he enjoyed the theatre enormously, and frequently presented private theatricals in his own home.
I've previously written about The Frozen Deep, a play by Wilkie Collins that Dickens substantially rewrote, directed, and starred in at his home, and then for the general public in order to raise money for charity.
The Frozen Deep wasn't the only Collins play Dickens produced, however. Two years prior to that, Dickens staged at his home of Tavistock House another Collins melodrama, this one called The Lighthouse. Calling himself "Mr. Crummles" after the character from Nicholas Nickleby, Dickens took on the role of the "lessee and manager" of "the smallest theatre in the world" according to this playbill printed up for the event: 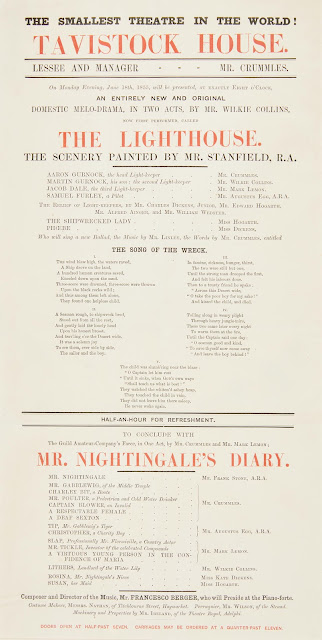 Clarkson Stanfield, who later provided some of the scenery for The Frozen Deep, painted the scenes for The Lighthouse, and a drop used for the performance later ended up at the Charles Dickens Museum in London: 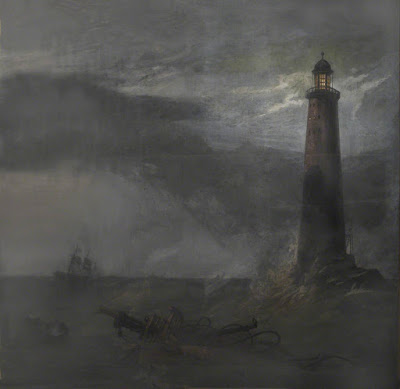 Collins appeared in the production as well, along with Dickens's friends Mark Lemon and Augustus Egg, and a slew of Dickens family members. Dickens also wrote the words to a ballad that accompanied the play.
The Victorians rarely went to see only one play at a time, and it was customary to conclude each evening of theatre with a farce that would send the audience home in a good mood. The farce for that performance was Mr. Nightingale's Diary, a one-act play Dickens had written together with Lemon.
With COVID-19 still keeping professional theatres closed, perhaps we should revive the tradition of private theatricals. Unfortunately, few of us happen to live in a bubble with people as talented as Dickens, Collins, and Stanfield!
Posted by James Armstrong, Playwright at 4:44 PM