Today is 233rd birthday of George Gordon Byron, the playwright of Manfred, Marino Faliero, and Cain, among other dramas.
Byron was known not only for his writing, but also for his devilish good looks. Last year Geoffrey Bond and Christine Kenyon Jones published a wonderful book called Dangerous to Show: Lord Byron and His Portraits, which brings together many of the images made of Lord Byron, both during his life and after his famous death in Greece.
George Sanders painted the first fully professional portrait of Byron, which showed him getting ready to climb aboard a boat with his servant Robert Rushton. Byron's windswept hair and clothing capture the spirit of the new Romantic era. An engraving of the painting was used as a frontispiece in a biography of the writer published in 1830, so it helped to solidify the image of Byron after his death as an adventurous hero. 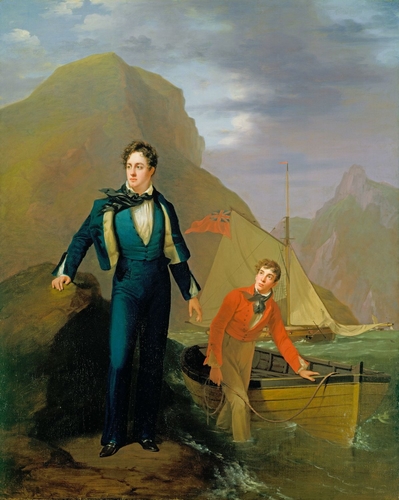 An even more famous portrait was painted by Richard Westall in 1813. Westall went on to illustrate a number of Byron's works, and the image of the dreamy, contemplative young man influenced the way Westall later portrayed Byron's protagonists. Byron himself tended to blend together his own identity with those of his characters, which is perhaps apparent in Thomas Phillips's portrait of Byron wearing some "traditional" Albanian clothes he had acquired. 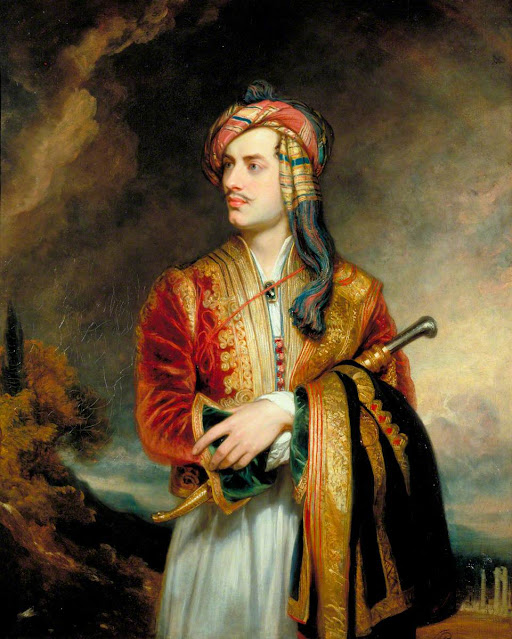 In 1816, Byron left Britain never to return. This is when he began his productive period as a dramatist, though only one of his plays was performed during his lifetime. The year after his departure, the Danish sculptor Bertel Thorvaldsen created a bust of Byron, which gives us a three-dimensional likeness of the writer. Apparently, one of Byron's friends wanted to add a laurel wreath to the bust, but Byron objected, saying he didn't want his head garnished like a Christmas pie. 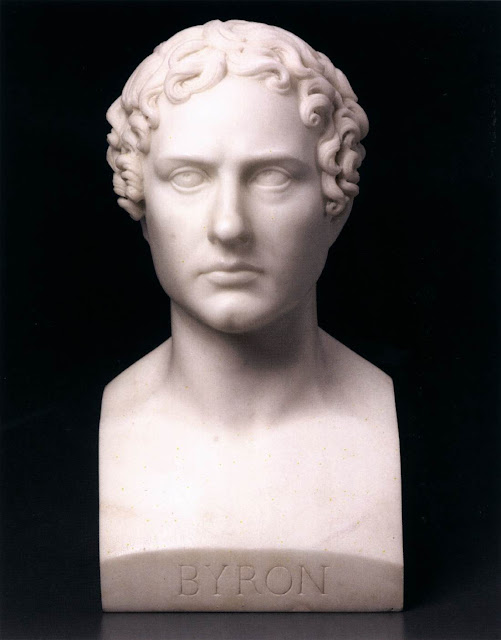 In 1822, Byron sat for another bust by Lorenzo Bartolini. After the writer's death two years later, the many images made during his lifetime became the basis for fanciful portrayals of his life. Charles Eastlake, for instance, created a famous painting of Byron's poem "The Dream" showing the writer amidst ancient ruins. 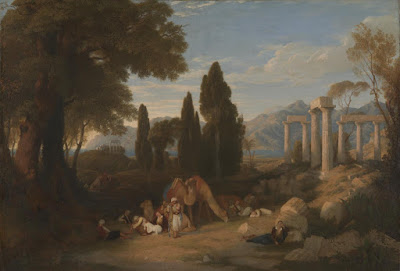 A computer screen can't really do these images justice, so if you're interested, check out the book from the University of Chicago Press. It's well worth it!
Posted by James Armstrong, Playwright at 7:19 AM