Last night, I got to see Kathryn Hunter in Timon of Athens at the Royal Shakespeare Company's Swan Theatre in Stratford-upon-Avon.

I had previously seen Hunter in Kafka's Monkey at Theatre for a New Audience. She was also filmed in that company's production of A Midsummer Night's Dream.

Hunter is wonderful in the role of Timon. This production flips the gender of not only Timon, but a number of the other characters as well. Alcibiades is played by Shakespeare veteran Debbie Korley, and Nia Gwynne plays the cynical philosopher Apemantus. The scene where Apemantus accuses Timon of stealing his (in this case her) philosophy is particularly moving.

The production uses Greek-inspired music composed by Michael Bruce to draw parallels between the opulence and downfall of Timon and the modern Greek fiscal crisis. To drive home parallels between Shakespeare's play and contemporary Europe, designer Soutra Gilmour dresses Alcibiades' revolutionaries in yellow vests like the recent protesters in Paris. Their anger at the greed and corruption of people in power certainly has resonances today.

Timon of Athens is infamous for having an ending that fizzles out rather than building to a peak, but that isn't a problem in this production. Director Simon Godwin transposes some dialogue from Henry V to the ending of the play for dramatic effect. Plus, he has Timon's limp body appear in a rather striking manner at the play's close.

This production runs until February 22nd. If you're anywhere near Stratford, it is well worth seeing. 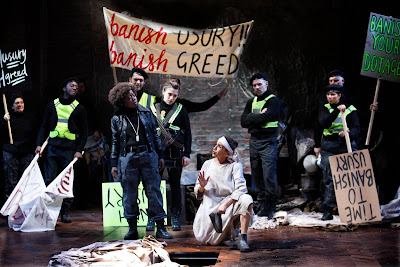