I just got back from seeing Christopher Marlowe's play Doctor Faustus performed by candlelight at the Sam Wanamaker Playhouse in London. 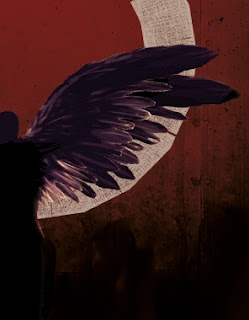 The production has certain parallels with the version of Timon of Athens I saw on Friday in Stratford-upon-Avon, in that both took male-heavy plays and recast not just the leads but a number of the principal roles as women.

Jocelyn Jee Esien plays a quite feminine Faustus in this production. Is that Miss Faustus or Mrs. Faustus? Ahem, that's Doctor Faustus to you! Playing the role in a full dress and jewelry--and surrounded by books--Esien is 100% woman and 100% intellectual.

She summons up Pauline McLynn as Mephistopheles. Dressed in red and with flaming red hair, she wears a combination of an Elizabethan dress and tight-fitting trousers. This Mephistopheles has no problem pushing back at Faustus, and Esien's Faustus openly mocks her in return.

Wagner is played by Mandi Symonds, who also doubles as the Old Man (changed to an Old Woman) at the end of the play. Hers is a comparatively serious Wagner compared to some of the ones I have seen in the past. However, we don't get to see Wagner conjure demons in imitation of Faustus, or gain a comic follower of his (err... her) own.

Doctor Faustus has both an A and B text, but this version seems to hew more to the B text published in 1616. Personally, I tend to favor the A text, but this production does a good job of taking some of the goofier scenes from the B text and performing them with class. (I just hope no one had to sell their soul to do it!)
Posted by James Armstrong, Playwright at 4:12 PM