I remember how when I saw Kathryn Hunter's wonderful performance in Kafka's Monkey at Theatre for a New Audience in 2013, the company had recently announced that they would be producing Shakespeare's A Midsummer Night's Dream... directed by none other than Julie Taymor.

Unfortunately, I missed that sold-out production, though I heard it was amazing. Fortunately, it was recorded and is now available on DVD. Since some of my students have seen the filmed version, I checked it out from the New York Public Library, and now I'm kicking myself for not seeing Kathryn Hunter again... but this time as Puck in A Midsummer Night's Dream!

Taymor's Dream is beautiful, though it sacrifices much of the comedy of the original play. Still, many of the scenes with the lovers and the rude mechanicals are quite funny. Hunter isn't so much funny as Puck as just incredible to watch.

Hunter will be appearing through the end of the month in The Emperor at TFNA. She'll also be acting with the Royal Shakespeare Company this winter as the title character in Timon of Athens in Stratford-upon-Avon. 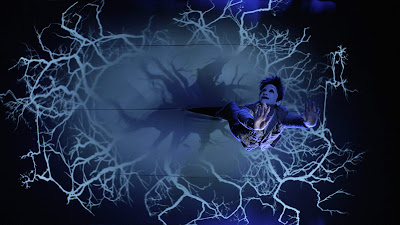