It Raineth (But Not Everyday)

The last couple of weeks in New York have been very... well... wet. That's not good for outdoor productions, and the last few performances of The Public Theater's Twelfth Night in the Delacorte in Central Park have been rather soggy.

Fortunately, last night was the exception. I lucked out and got to see the show during a clear evening, and it was phenomenal. The weather looks good for tonight, so you might want to try to get to the Delacorte early to see if you can get standby tickets. That's how I saw Othello earlier this summer, and I got in no problem.

There's no show on Monday, and Tuesday is opening night. After then, it's going to be considerably more difficult to get tickets. This production, the brainchild of singer-songwriter Shaina Taub and co-director Kwame Kwei-Armah, is destined to be legendary. Shakespeare's dialogue is condensed down to its essence, and Taub has penned some brilliant songs that perfectly capture the play's key moments.

The result is an original musical that is faithful to the spirit of Shakespeare's comedy while also creating something wonderful and new. Whether it's Olivia's household arguing over who is the worst, or Malvolio fantasizing about greatness, or the people of Illyria singing about the word on the street, the songs are always entertaining as well as advancing the storyline.

Taub, a veteran performer from the off-Broadway productions of Old Hats, Natasha, Pierre, and the Great Comet of 1812, and Hadestown, clearly knows what she's doing. In addition to providing the songs for Twelfth Night, she also plays a feisty Feste with perfect deadpan timing.

Oskar Eustis co-directed this production. The musical originally played the Delacorte for just one weekend back in 2016, so it's great to have it back for a full five-week run this summer. Its next stop will be London at the Young Vic, where Kwei-Armah is the incoming artistic director.

Will a Broadway production follow? One can hope, but my advice is not to wait. See it now! 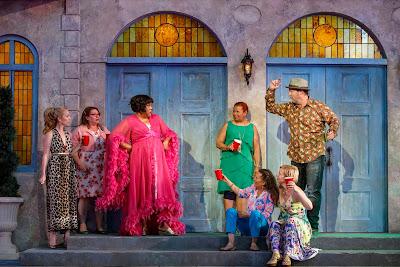 Posted by James Armstrong, Playwright at 11:01 AM