Othello in the Park

I was hoping to get in some Renaissance dance in Central Park last night, but that didn't work out, so instead I decided to try the standby line to see Othello at the Delacorte.

In case you didn't know, The Public Theater is currently performing free Shakespeare in the Park. Othello is playing until June 24th, and then Twelfth Night will run from July 17 to August 19th.

How easy is it to get tickets? Well you can wait in line or sign up for the mobile lottery. There's also free distribution throughout the five boroughs. However, I just showed up at 7:30 and got a ticket. The further into the run, though, the harder it is to get tickets, so go soon.

Coming into the theater, I happened to run into Rob Stauffer, who I met last year at the Shaw conference in Niagara-on-the-Lake. Small world! Unfortunately, I didn't bring a sweater, as I'd figured I would keep warm dancing that evening. Big mistake! If you go, make sure you bring something in case it gets cool.

How was the show? Well, I'm afraid I got in trouble last year for posting on my blog about Julius Caesar before it opened, so I am unable to provide you with a review of how good the show is and how you absolutely need to see it. I can't tell you that Ruben Santiago-Hudson does a masterful job directing, nor that Chukwudi Iwuji, who was wonderful as Edgar in The Public's King Lear a few years ago, is an Othello you won't want to miss.

It's really too bad, because I'd love to tell you how Corey Stoll, who played Brutus in last year's Julius Caesar, was unlike any other Iago I've ever seen. Motell Foster was also in Julius Caesar, but due to the press embargo, I won't be able to tell you what a revelation it was to see him play Roderigo. Heather Lind's Desdemona will have to go without note, as will Alison Wright's memorable performance as Emilia. I loved Flor De Liz Perez in the Public Mobile's production of Pericles, but I just won't be able to tell you how good she was as Bianca!

I guess that means you'll have to see it for yourself. Hurry, though! Once word gets out, you won't be able to just walk up at 7:30 and get standby tickets like I did. 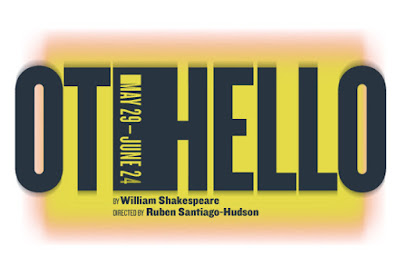 Posted by James Armstrong, Playwright at 8:45 AM