This past weekend, I saw Charles Mee's play First Love at the Cherry Lane Theatre. Director Kim Weild does an excellent job making the piece come to life, devising a series of magical moments to keep the audience engaged.

Her secret weapon is the set, designed by Edward Pierce to resemble a painting by René Magritte. A door made of sky stands at the center of the stage, opening to reveal a series of props and actors who appear seemingly by magic. Each time the door opens, it is a sheer delight.

Music plays a part, too, as it often does in Mee plays. A microphone on one side of the stage and a piano on the other both find their inevitable uses, usually just before a sense of monotony might threaten to appear. Monotony (or perhaps duotony) is a constant danger in a two-person play about falling in love, but while veteran actors Michael O'Keefe and Angelina Fiordellisi form the core of the show, the play has a another secret weapon in store for us as well.

Her name is Taylor Harvey. Appearing in a series of costumes as the "Young Woman" she helps to keep the show fresh as we work our way through the relationship of the main characters. The lovers are supplied with the names "Harold" and "Edith" but might as well have any other names. Mee is interested in the universality of love, which is fitting for the month of June, when we are frequently reminded that love is love is love.

However, my favorite moments were the glimpses of individuality--such as the opening scene on a park bench--when Mee gives us specific details about these characters' histories. Perhaps love isn't so universal after all, but different for each and every pair of people who have ever experienced it. In these moments, we hear about individual passions, and these two individuals' relationships to the pasts they have inhabited.

Those pasts are considerable. Both characters have lived full lives, been married, had kids, and are entering what should be their Golden Years, though until now neither seems to have been truly in love. This first love for them is not puppy love, but the sophisticated love of two people who have already lived full lives but are not willing to stop living just yet.

First Love is a limited engagement playing only until July 8th, so if you want to see it, get your tickets soon. You might not get a second chance! 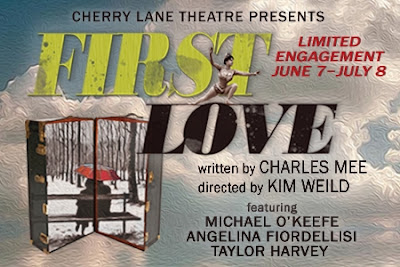