Last night I saw John Wulp's play The Saintliness of Margery Kempe at the Duke on 42nd Street. The play tells the story of the medieval English mystic who dictated what is considered to be the first autobiography in the English language.

The fact Kempe holds that distinction is all the more remarkable given that she was not a canoness or nun, nor a queen or noblewoman. In fact, she had to dictate the book because she herself could neither read nor write, but was simply the wife of a town official and the owner of a brewery.

In this production directed by Austin Pendleton, Andrus Nichols portrays the remarkable Kempe. A co-founder of the Bedlam theatre company, Nichols has distinguished herself playing such roles as Gertrude in Hamlet and Elinor Dashwood in Sense and Sensibility. She does an equally fine job as Kempe, but the script makes her take some interesting turns with the character.

In Creature, Heidi Schreck's dramatization of Kempe's life, the mystic is portrayed as well... a mystic. A woman who really is different from other people and has visions she cannot explain. Wulp gives us a much more worldly Kempe, a woman who appears to fabricate a religious vision as an excuse to not have sex with her husband. (Kempe really did turn to a celibate marriage, but only after having 14 children, not the mere six portrayed in the play.)

At first the play seems to be making fun of Kempe, but in the second act it gets us to question whether she might be someone special after all. In a dubious miracle, she is struck by a rock and beam in a collapsing church, but when she calls out to Jesus, her pain disappears. She dresses in white and goes on a pilgrimage to the Holy Lands, but spends so much time weeping emotionally that the authorities ban her from Jerusalem.

Both sinner and saint, Wulp's Kempe is neither entirely admirable, nor someone we can completely condemn. While Schreck ends her play with Kempe's visit to fellow mystic Julian of Norwich, Wulp has her instead witness the canonization of Bridget of Sweden, another mystic who like Kemp was a middle-class wife and mother (though from a better family and more adept at staying out of trouble).

If you want to see The Saintliness of Margery Kempe, it's running until August 26th. 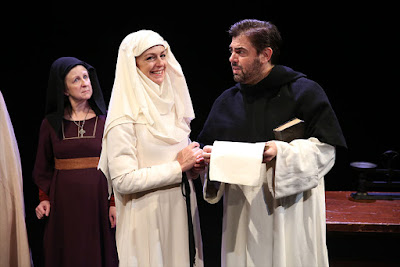 Posted by James Armstrong, Playwright at 7:59 AM