While I was not as impressed with Bedlam's Hamlet as I was with the company's Saint Joan, I'm very glad I went to see it last night. The first act of the play was the highlight. Actors appeared with flashlights in various parts of the darkened theatre for the opening ghost scene, which managed to be both comedic and legitimately scary. The close of Act I was also amazing. Shakespeare has the ghost crying under the stage with the voice moving about like a mole. I've seen many directors try to get that to work, but Eric Tucker actually did it! 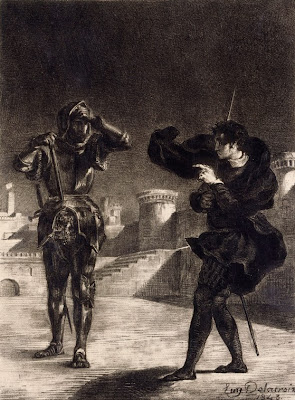 There was an intermission after Act I, and Acts II and III were performed together in three-quarter round. In this part, I got to see Andrus Nichols shine as Gertrude. I missed her performance as Joan of Arc the previous night, instead seeing her remarkably brilliant understudy, so I was pleased to get to see Nichols in Hamlet. She has wonderful chemistry with Tom O'Keefe, who plays Claudius, and there is constant tension onstage between herself and Hamlet, played by Tucker. The play within a play was my favorite part of this section, with each of the actors taking turns playing the prologue, poisoner, and player king and queen, then going back to being the court watching the performance. 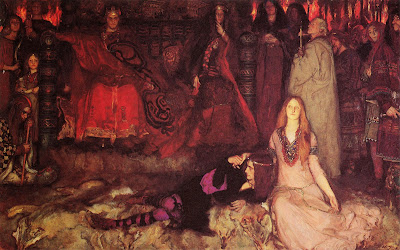 After a second intermission, the audience returned for Acts IV and V, performed in the round. The grave diggers, played by Nichols and O'Keefe, carried on a trash bag filled with dirt which they dumped in the middle of the stage. They were hilarious, and their comedy was suitably interrupted by Edmund Lewis entering as a fanatical Laertes. 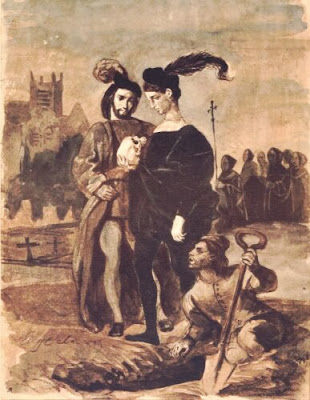 At three hours and ten minutes, the production was somewhat longer than Shakespeare's company would have taken, but the King's Men inevitably cut the text to suit a particular audience. Bedlam, having decided they would cut essentially nothing, did an admirable job. I would love to see them perform other works as well. (Perhaps my own adaptation of Moby-Dick...)

Posted by James Armstrong, Playwright at 8:51 AM