Last night I saw Bedlam's production of Saint Joan, which I heartily recommend. It's not often you get to see this massive 1923 epic by George Bernard Shaw. Its sprawling scene and massive cast make it virtually un-produceable for today's impoverished theatre. I remember years ago the Alabama Shakespeare Festival did it in Montgomery, but they had a state-supported budget and legions of interns. How could anyone stage Saint Joan in New York? 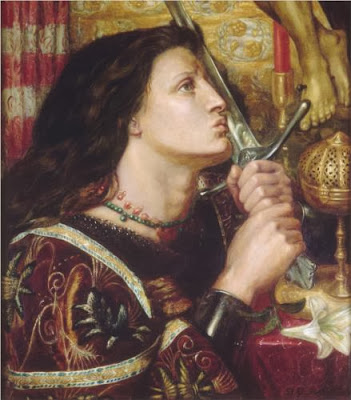 Well, Bedlam figured it out. Get a cast a four extraordinarily talented actors, have them perform multiple roles, use modern dress and a simple but innovative set, and just tell story... uncut... using every single word Shaw wrote. The result: brilliant.

Bedlam co-founder Eric Tucker wrote in his director's note that the company was always asking, "What does the audience need in order to get this story?" Well, sometimes it was a pair of glasses to show an actor was portraying a new character. Sometimes is was a funny voice. Sometimes it was taking paint and writing the name of the town on the wall of the set. Sometimes it was the ASM walking onstage and playing a cassette tape. Whatever it was, they did it.

In addition to directing, Tucker plays Warwick, as well as bunch of other parts. The brilliantly comic Edmund Lewis and the often sinister Tom O'Keefe play at least a dozen roles each. The only performer playing a single role is the actress who portrays Joan. I saw the understudy, Samantha Steinmetz, but I don't have a single complaint. She showed Joan's journey from being just a simple country kid with a dream, to being an accomplished soldier, to being a tormented scapegoat, to finally finding peace and becoming a true saint.

Though the dress was modern and the staging unconventional, this was very much Shaw's play as he intended it--in spirit if not in visuals. The first three scenes were staged in three-quarter round with a clipped pace that constantly kept the play moving. Some of the original portrayals of characters were rather broad, but that's pretty much how Shaw wrote them. More nuanced characterization came later.

After the first three scenes, the audience takes its first intermission and is instructed to take all of their belongings outside of the theatre. When they come back, the seating is rearranged, with scene four being played right in the middle of the audience. A sheet behind the audience then comes down, and the audience turns around to watch scene five.

After a second intermission, the audience comes back in to find folding chairs on what previously had been the stage. Scene six, the trial scene, is enacted before them. Joan sits high up on a platform with a beam of light illuminating her face. The other actors move around behind the audience, calling out their lines from the darkness. As we got to Warwick's line, "Hm! I wonder!," I figured that after doing the entire text uncut, Bedlam would drop the epilogue. Nope. The audience was asked to turn their folding chairs around, and behind us was Joan, seated amidst other audience members, ready for the epilogue.

Amazingly enough, the show only runs about three hours even with the two intermissions, and it seems much less than that. The final epilogue, as unnecessary as it is, was truly moving. After seeing Bedlam's staging of Saint Joan, I don't know that I would ever want to see it done another way.

Saint Joan is running in rep with Bedlam's Hamlet at the Lynn Redgrave Theater on Bleeker Street. After seeing how they handled Shaw, I am definitely going back for the Shakespeare. You can find out more about the shows here:

Posted by James Armstrong, Playwright at 11:39 AM