In the mid-1590s, Shakespeare began work on a tetralogy of history plays telling the story of the English monarchy from the abdication of Richard II to the triumphs of Henry V. Since all four plays lead to the ultimate victory of Henry, they are often referred to collectively as the Henriad.

Shakespeare's first tetralogy had actually taken place after the events of the Henriad. It consisted of three plays covering the reign of Henry's son, Henry VI, and then one covering the rise and reign of a hero-villain: Richard III. In a final play the Duke of Gloucester--who rose through the ranks in the previous plays--triumphs and falls in his own villainy. 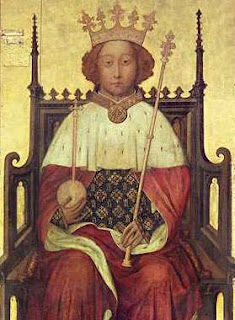 The Henriad was to be quite different. Subtler and containing greater psychological realism, it begins with the reign of Richard II, who abdicated in favor of his cousin, Henry Bolingbroke, and was later murdered. I've always found the play Richard II to be difficult, in part because it relies on an unexplained dispute between Bolingbroke and Thomas Mowbray, the Duke of Norfolk.

Shakespeare's audience might have been familiar with the dispute from an anonymous play called Woodstock, about Thomas Woodstock, the king's uncle and the first Duke of Gloucester (long before the time of the more famous Richard of Gloucester). Woodstock's wife was the elder sister of Bolingbroke's bride, so the two were brothers-in-law as well as kinsmen. Woodstock rebelled against Richard II, was imprisoned, and later ended up dead. No one knows who killed him, but speculation has always pointed to Mowbray.

In Richard II, the king tries to get the two nobles to drop their dispute, counseling:

Wrath-kindled gentlemen, be rul'd by me,
Let's purge this choler without letting blood.
This we prescribe, though no physician;
Deep malice makes too deep incision.
Forget, forgive, conclude and be agreed,
Our doctors say this is no month to bleed.

Unable to resolve the dispute, the king banishes both men for a time, but when Richard tries to seize lands belonging to Bolingroke in the nobleman's absence, Bolingbroke returns. With the help of the Percy family who dominated the northern part of England, he successfully rebels against the king. Ultimately, Richard meets the same fate as Woodstock. He is imprisoned in a castle and then murdered under suspicious circumstances. 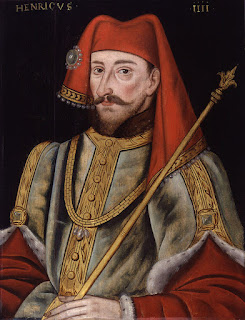 As King Henry IV, Bolingbroke had a troubled reign given his own past behavior and uncertain claim to the crown. In The First Part of Henry IV Shakespeare portrays him as also worried about his son, Prince Hal. Young Hal has fallen under the influence of as untrustworthy nobleman. Historically, that had been Sir John Oldcastle, a knight who supported the Lollard heresy and who later rebelled against his old protege once Hal had become king.

In the 1590s, though, many Protestants, particularly of the extremist Puritan variety, hailed Sir John Oldcastle as a martyr for their cause--in spite of the fact that Protestantism didn't actually exist yet when Oldcastle was executed. Shakespeare ended up changing the name of Hal's unsavory mentor to Sir John Falstaff.

In The Second Part of Henry IV, Hal becomes distanced from Falstaff, and he ultimately must banish him from his presence. This rejection of his former mentor is necessary, as Falstaff has set himself up as a master of misrule, a criminal and thief who will oppose order and justice. Still, many audiences today are shocked by the harsh language Hal uses to assert his own authority:

I know thee not, old man, fall to thy prayers.
How ill white hairs becomes a fool and jester!
I have long dreamt of such a kind of man,
So surfeit-swell'd, so old, and so profane;
But being awak'd, I do despise my dream. 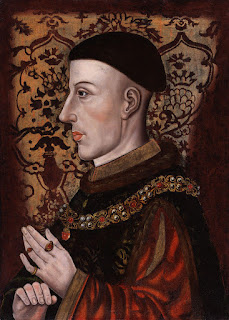 Shakespeare's audience, however, would have been aware of the fact that Hal as Henry V became one of the greatest national heroes England had ever known. After escaping a conspiracy that involved one of his closest friends, he is shown in Henry V invading France and winning a spectacular battle against all odds near the castle of Agincourt.

Henry V does not end with that famous victory, though. It goes on to show the English king wooing Princess Katherine, the daughter of the King of France. After their marriage, France recognized Henry as heir to the crown of France. All he had to do was outlive his father-in-law and he would be the undisputed master of both sides of the English channel.

However, he wasn't able to do it. Two years later, he died of dysentery, and his infant son was crowned King Henry VI. The young king's uncles tried to run both England and France, but ultimately failed to hold the two together (in no small part due to the leadership the French found in Joan of Arc). The play Henry V alludes to the troubles to come in an epilogue which states:

Henry the Sixt, in infant bands crown'd King
Of France and England, did this king succeed;
Whose state so many had the managing,
That they lost France, and made his England bleed;
Which oft our stage has shown...

With those words, the Henriad points back towards Shakespeare's earlier tetralogy, and the bloody reign of Richard III.
Posted by James Armstrong, Playwright at 3:17 PM