I just got back from seeing the Bedlam theatre company's wonderful production of Pygmalion at the Sheen Center. Get your tickets soon, as it is not to be missed. 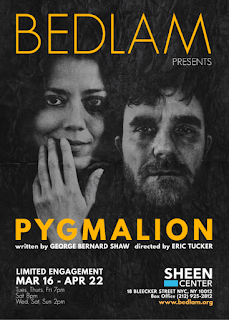 Bedlam has a knack for doing the plays of Shaw. Their production of Saint Joan was one of the best things I saw in 2013. Once again, director and Bedlam co-founder Eric Tucker has made Shaw feel contemporary and relevant to today's audiences.

The production uses an immersive technique for the first act, having the actors mingle with the audience in a space constructed to look like a London street. Tucker himself is there, playing Henry Higgins with unabashed ego and self-satisfaction. Vaishnavi Sharma plays Eliza with a strong Indian accent, requiring a few line changes, but the concept works.

After the first act, the audience is ushered into a specially constructed seating area in the Sheen Center's black box space. The rest of the play is performed in three-quarters round, with the cast of six performing multiple roles, in true Bedlam style. Actors change their accents quickly from one character to another while doffing new hats or wearing shawls to indicate a new character.

This technique has worked in a number of Bedlam shows, including Hamlet and Sense and Sensibility, but it is especially apropos here, in a play about the importance of speech. Also, watching Eliza's Indian accent disappear as she is assimilated more and more into "respectable" society adds a new element to this story of a flower girl taught to speak like a duchess.

In addition to Tucker and Sharma, the play also features Bedlam veteran Edmund Lewis, who was a memorable Laertes, but now makes an even stronger impression as Mrs. Higgins! Nigel Gore, who was a brilliant Dr. Rank in Theatre for a New Audience's A Doll's House, plays a perfect Pickering, as well as assorted other characters. Rajesh Bose is hysterical as Mr. Doolittle, and Annabel Capper does a great job going back and forth between Mrs. Higgins's maid and Clara Eynsford-Hill.

Pygmalion is only playing until April 22nd, so make sure you don't miss out. As Eliza might say, it would be a bloody shame!
Posted by James Armstrong, Playwright at 9:19 PM