I'm back now from North Carolina, where the students at East Carolina University put on a wonderful production of my adaptation of Alice in Wonderland. 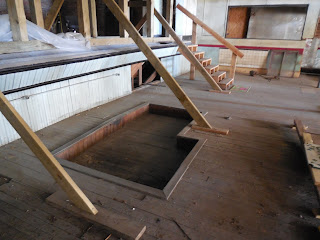 On Sunday, I got to see the show at the historic Turnage Theatre in Washington, N.C. It's a beautiful building, originally built in 1913, and renovated and reopened 100 years later by a local arts council.

Originally, there was a vaudeville theatre built on the top floor, above a department store. Roy Rogers performed there, and according to legend rode his horse Trigger up the stairs and right into the theatre. The space was also used to show movies, but with the advent of talkies, audiences started to complain about too much noise from the street. Consequently, management decided to build a second theatre behind the first one. 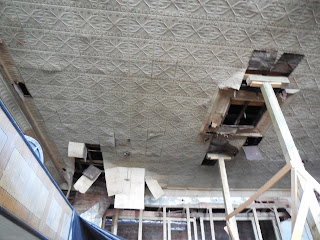 It is the newer theatre that is in use today. The old department store beneath the vaudeville theatre is now a spacious lobby and cafe that opens into the lavish theatre where Alice was. The arts council has plans to eventually restore the older vaudeville theatre as well, but has to raise the money first. Fortunately, they were kind enough to let me upstairs to see the older space, and I took a few pictures. It's beautiful up there.

Near the stage is an indention in the floor where a piano used to be that could be played during silent movies. The ceiling is amazing, but falling apart. A chandelier used to hang down over the audience, but it is long gone. You can still see the balcony (though not climb up to it right now) and even go into the office, where the word "REVIVAL" is stenciled on the wall.

Best of luck to the people of Washington as they continue to renovate this gem of a theatre! 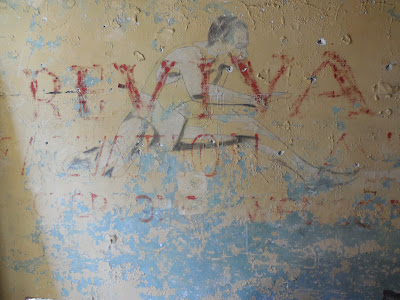