During the beginning of the eighteenth century, many playwrights in Britain tried to imitate the great comedies of the Restoration period, but they eliminated much of the bawdry that made those comedies funny. The laugh-free plays they produced earned the label "sentimental comedies" since they continued to appeal to an audience's sentiments even as they erased what had been a source of great humor. The Irish dramatist Richard Steele scored a hit in 1722 with his sentimental comedy The Conscious Lovers. Based very loosely on Terence's Roman play The Girl from Andros, the play featured heroes who controlled and overcame their passions rather than giving in to them. The play emphasized patience over emotions and peaceful resolutions over violent action.

The small success Steele had was dwarfed, however, by the runaway hit by John Gay called The Beggar's Opera. Premiering at the Lincoln's Inn Fields Theatre in London in 1728, the play ran for 62 consecutive performances, the longest run of any play in British history up to that time. It was periodically revived throughout the century, becoming one of the most performed plays ever (though in the twentieth century it was largely eclipsed by its German-language adaptation The Threepenny Opera). Gay used the melodies of popular songs but rewrote their lyrics to make pointed comments about public figures, including the powerful Sir Robert Walpole, the first Prime Minister in British history. This new form, called ballad opera, was imitated throughout the century, including by Gay himself in a sequel to the play, Polly, which Walpole had banned.

Traditional tragedies of kings and queens seemed out of place in a world that was increasingly being run by the middle classes. The playwright Henry Fielding exploited this disconnect by mocking high drama in his play The Tragedy of Tragedies, which opened in 1731. Also known as The Life and Death of Tom Thumb the Great, Fielding's play featured a protagonist diminutive in stature in love with a princess named Huncamunca. To add to the comedy, Fielding had a giantess fall in love with Tom Thumb. Nearly everyone in the play dies in grand fashion, and audiences laughed hysterically at the deaths of kings, queens, and nobles.

Just as Gay had run afoul of Walpole, Fielding, too, provoked the wrath of the powerful prime minister. In The Historical Register for the Year 1736 (which actually debuted in 1737), Fielding made fun of all of the events of the previous year, particularly excoriating Walpole. This time, however, Walpole was ready. He took advantage of a particularly outrageous satire of the king called The Golden Rump and introduced to parliament the Licensing Act of 1737. The act provided for extreme censorship of the British stage, ensuring that playhouses be licensed by the Lord Chamberlain, and stating that anyone who offered a play without a license be fined the exorbitant amount of fifty pounds for each offense.

The two patent theatres in London now had a virtual monopoly throughout the entire country. What was more, all new plays had to be submitted to the Lord Chamberlain at least 14 days before they were performed, and if he deemed them unfit for performance, there was no appeal. A theatre manager who performed a banned play could lose his license immediately, and strolling players who performed without a license were treated as vagabonds. The artist William Hogarth created a famous engraving called "Strolling Actresses Dressing in a Barn" which depicted a copy of the Licensing Act lying on a bed in the corner. As viewers well knew, the act was the death-knell for small companies like the one depicted in the engraving.

Fielding gave up the theatre to write novels, and most serious authors in England followed his lead. Almost two decades passed before Britain produced another play that would capture the public's imagination and work its way into the standard repertoire. That drama was John Home's tragedy Douglas, which perhaps not coincidentally opened in Scotland, debuting in Edinburgh and only later transferring to London. The Licensing Act worked all too well, banishing serious topics from the stage and intimidating authors for years to come. While the eighteenth century became an era of tremendous growth for the English novel, English-language drama languished until the 1770s.

As it happens, I recently purchased a 19th-century copy of the Hogarth engraving. The details aren't as fine as Hogarth's original, but I'm offering the image for free to anyone who wants to publish it in a journal, book, website, whatever. If you need a higher quality image, feel free to contact me. You can credit it to the personal collection of James Armstrong. 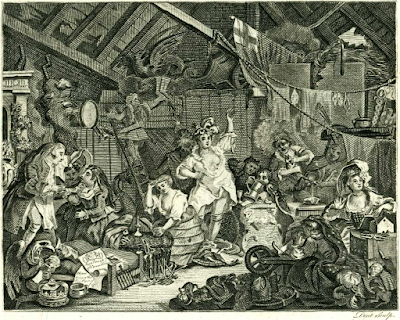